Tales From That Other War: If a Province Falls in Pakistan, Does Anyone Know It? 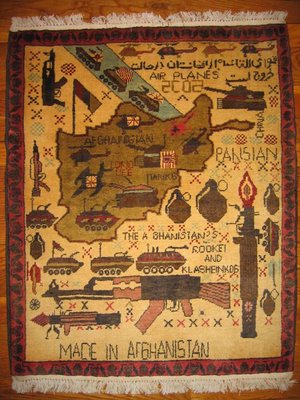 So how are things going with that other war? You know, the one in Afghanistan.

In a word, lousy.


The Taliban may not be in control of Afghanistan, but neither is anyone else as what has been substantially a rural insurgency has now spread to the capital.

NATO commanders are learning to their dismay that peacekeeping in that part of the world bears little resemblance to keeping the lid on a European country, and their pleas for 2,500 troops and more attack helicopters to reinforce the 19,000 troops battling the Taliban are going unanswered.

Part of the problem is that the U.S. in Iraq and U.N. peacekeepers elsewhere are competing for the same finite pool of troops. Canada, which has led the fight against insurgents in the volatile south of Afghanistan, spends only a tiny amount on its military and it is stretched to the breaking point.

And while President Bush this week said he was renewing his commitment to winning the "ideological struggle" in Afghanistan, with U.S. forces up against the wall in Iraq no one believes that he is doing anything more than paying lip service to that notion.

The Decider himself more or less confirmed that when he told Fred Barnes of Fox News that capturing or killing Osama bin Laden is no longer a priority.

Times have certainly changed, haven't they?

Meanwhile, Pakistani President Pervez Musharraf, who blows hot and cold on the War on Terror, has deployed almost 90,000 soldiers on his country's border with Afghanistan to tackle insurgents and asserts that the Taliban have overtaken Al Qaeda as the region's biggest threat.

Bill Roggio and other correspondents in the know would find that view disingenous because the two groups have become virtually indistinguishable.

Roggio, blogging at The Fourth Rail, says that the easternmost provinces of Pakistan recently have come under Taliban control without anyone in the outside world noticing.

Roggio says that the fall of North and South Waziristan and rise of the so-called Islamic Emirate of Waziristan was telegraphed by Al Qaeda and the Taliban months ago:

"During the winter of 2006, Osama bin Laden announced his strategy to establish bases and pockets of territory along the Afghan-Pakistani border. The Taliban and al-Qaeda (virtually indistinguishable in this region at this point in time) had been fighting a long term insurgency against the Pakistani Army after President Musharraf put troops in the region shortly after 9-11. . . .


Pro-Pakistani government tribal leaders and informants were murdered and made an example of. The Pakistani Army paid a devastating price for their operations in . The official government reports claim around 200 soldiers killed, however the unofficial numbers put it at about 3,000 killed in combat."

(Hat tip to Wretchard at The Belmont Club for the Roggio post.)tmtbhra
Posted by Shaun Mullen at 3:17 AM
Email ThisBlogThis!Share to TwitterShare to FacebookShare to Pinterest