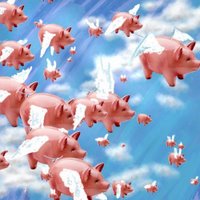 I have remarked in the past that pigs will fly before George Bush acknowledges global warming and its attendant perils, but it seems that the porkers may be taxiing out for takeoff.

According to a story in The Independent:

"The president is preparing an astonishing U-turn on global warming. After years of trying to sabotage agreements to tackle climate change he is drawing up plans to control emissions of carbon dioxide and rapidly boost the use of renewable energy sources.

"Administration insiders privately refer to the planned volte-face as Mr. Bush's 'Nixon goes to China moment,' recalling how the former president amazed the world after years of refusing to deal with its Communist regime. Hardline global warming sceptics, however, are already publicly attacking the plans."

I myself am proceeding cautiously on this one. Recall that Bush made another big "U-turn" on reliance of foreign oil in announcing a new energy plan last year.

The devil, of course, was in the details -- lots of smoke and mirrors, energy self-sufficiency goals to be attained years and years from now and precious little dinero from the federal treasury to make it all happen.

The question arises as to whether Bush is trying to pre-empt Al Gore on behalf of the 2008 Republican presidential candidate.

Gore, who may be pondering another run for the roses in 2008, said in a speech at New York University law school that rising temperatures pose an enormous threat and that only a movement akin to the nuclear freeze campaign for arms control a generation ago would push elected officials out of longstanding deadlock on the issue.

More here.
Posted by Shaun Mullen at 3:22 AM
Email ThisBlogThis!Share to TwitterShare to FacebookShare to Pinterest