Iraq: A State of Denial, A Disturbing Poll & More 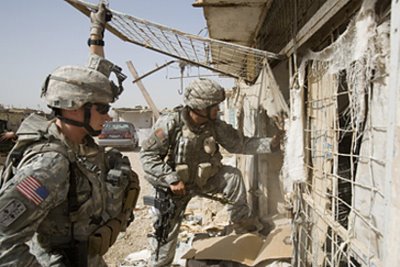 Bob Woodward has fallen far from the days when he was half of the celebrated investigative reporting duo that broke the Watergate scandal. The Washington Post journo's recent fawning offerings on President Bush as incisive leader have disappointed. But Woodward has awoken from his slumber and sunk his teeth into something substantive -- the administration's dysfunctionality.

"State of Denial: Bush ar War, Part III," which will be published on Monday, says that:

* Bush’s top advisers are often at odds among themselves and sometimes are barely on speaking terms, but share a tendency to dismiss as too pessimistic assessments from American commanders and others about the situation in Iraq.

* The White House ignored an urgent warning in September 2003 from a top Iraq adviser who said that thousands of additional American troops were desperately needed to quell the insurgency there.

* Chief of Staff Andrew Card begged the president to shed Donald Rumsfeld after the 2004 election. He refused. Not even wife Laura could talk him into giving the defense secretary the heave-ho because such a move would be seen as an expression of doubt about the course of the war and expose the president to criticism.

More here on the book, and an analysis that notes Woodward comes awfully close to calling the president a liar in contrast to the flattering depictions in his first two books. Can you imagine? A liar?

POLL AXED
Remember when the benevolent U.S. was going to rescue the Iraqi people from a brutal dictatorship and they would throw flowers at the feet of their liberators? That was then and now is now -- and now is a disturbing (but not surprising) new poll that say six in 10 Iraqis approve of attacks on U.S.-led forces.

The poll, done for the University of Maryland's Program on International Policy attitudes, also found that:

* Slightly more than half of Iraqis want their government to ask U.S. troops to leave within a year.

* An overwhelming majority have negative views of Osama bin Laden.

THE MEAN STREETS OF BAGHDAD
Another chilling report from Zeyad at Healing Iraq on kidnap-murders of women, assassinations of leading surgeons and police offices sympathetic to Sunni political interests who tip people off as to when U.S. troops were going to make unannounced so militamen would have time to hide their weapons and hostages -- at police stations.