Valentines for the New United States of Torture 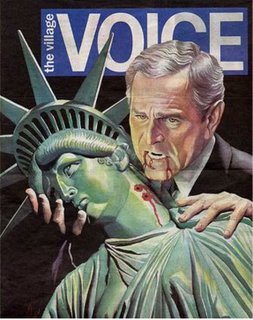 When I woke up this morning I felt like a part of me had died. Sort of like when JFK was assassinated. Or those jetliners flew into the World Trade Center. Or my parents passed away.

I was not quite awake and at first couldn't remember why I felt so empty. Then I sat up, carefully swung my legs out of the bed so as to not wake the DF&C, and did a few stretches.

It was only as I stood and shambled toward the bathroom that I remembered that my beloved country, the one that I have served in war and in peace, had undergone a startling name change -- the very first in its 230 years of existence.

It is now called the United States of Torture.

Am I being hyperbolic or hysterical? I don't think so.

Am I exaggerating the threat to my rights enshrined in the Orwellian terrorist torture-trial bill now awaiting President Bush's signature that triggered the name change? Absolutely not.

Am I being unrealistic in believing that the laws and powers memorialized in the Constitution have held us in good stead down through the years and are up to the challenge of beating back the threat of the Islamic jihad? No.

Knowing as I did that Bush and his neocon cabal were capable of doing great harm, did I ever think that these weasels would ram through -- and a spineless Senate would acquiesce to -- such obscene and constitutionally dubious legislation? I did not.

Can our civil liberties be restored once they are taken away? Fat chance.

That's all I've got to say, but here's a roundup of thoughts from others who also are filling a bit empty:

No one in the blogosphere as campaigned as passionately and intelligently against officially sanctioned torture than Andrew Sullivan at The Daily Dish:

"Late last night, before nodding off, I wondered, as I often do, whether I'd hyperbolized the threat from the looming detention-torture bill. 'Legalizing tyranny' is a very strong phrase and I don't want to cry wolf. In the sense that this president intends to seize random Americans and rush them into black sites and torture them at will, it's hyperbole. But in a deeper sense, I think it's completely accurate. The system we're talking about is to do with wartime. A president in the past has had the option of seizing enemy combatants on a battlefield and detaining them without charge as POWs. There's no threat to liberty there. What's new is that in this war, enemy combatants have been designated as such not just on the battlefield -- but anywhere in the world. What's new is that they are no longer entitled to POW status. What's new is that this war is for ever. . . .

"Put all that together and you really do have the danger of taking emergency measures for wartime and transforming a peace-time constitution into an essentially martial system, where every citizen or non-citizen can be apprehended at will and detained without charge. I repeat: this is a huge deal. It really should be a huge deal for conservatives who care about restraining government power. Its vulnerability to abuse is enormous; sanctioned torture, history tells us, never remains hermetically sealed. It always spreads. It eats away at decency and law and civility. If the president sincerely believes that torture is our most potent weapon in this war, and that habeas corpus is a quaint relic from the past, then we are in far greater peril than even the most dire pessimists believe."

Joe Gandelman sheds a tear at The Moderate Voice:

"Yesterday was a terrible, terrible day in American history. It was a day that may live on in infamy, a day that America, or at least an important part of her, died."

"On every issue, there are big differences but the biggest difference is the disregard for our constitutional democracy, the disdain for checks and balances, the denial of accountability that marks this president and vice president, and that's really our entire system being put at risk. Maybe we can dig ourselves out of the hole on fiscal responsibility, energy and health care before it's too late, but we cannot afford to have our Constitution shredded and our country's commitment to freedom basically thrown out after centuries of setting the standard by which others are judged."

Christopher Mugel of Richmond, Virginia, in a letter to The New York Times:

"Terrorism poses a grave and different kind of threat to the Republic. Yet it is no more grave than, say, Nazi Germany or the Soviet Union.

"No one has explained how it is different in ways that justify condoning torture, rewriting international law, discarding principles of due process and human decency, ceding judicial authority to the president, and putting our troops and reputation in further jeopardy.

"The president’s pre-election antiterrorism legislation will do these things. It is a measure of cravenness that members of both parties would vote for this bill for political expediency."

"The legislation . . . authorizes the president to seize American citizens as enemy combatants, even if they have never left the United States. . . . It also allows him to seize anybody who has 'purposefully and materially supported hostilities against the United States.' This grants the president enormous power over citizens and legal residents. They can be designated as enemy combatants if they have contributed money to a Middle Eastern charity, and they can be held indefinitely in a military prison.

"Not to worry, say the bill's defenders. The president can't detain somebody who has given money innocently, just those who contributed to terrorists on purpose.

"But other provisions of the bill call even this limitation into question. What is worse, if the federal courts support the president's initial detention decision, ordinary Americans would be required to defend themselves before a military tribunal without the constitutional guarantees provided in criminal trials."

"Now let me just state at the outset that like President Bush I am opposed to torture except in certain circumstances when it's really, really necessary, which is why I am a member of Blogs Against Torture. I agree with the President that 'torture anywhere is an affront to human dignity everywhere.' But liberals have got us all so confused with their convoluted notions of what torture is so we need to get back to traditional torture values. If we let the liberals and activist judges define torture down, the next thing you know our secret prisons will be like country clubs and the terrorists will take over our country and impose their ideas of morality on us, which, except for the stuff about homosexuality and a few other things, we vehemently disagree with."

"This bill is simply outrageous. I doubt whether many Democratic Senators or staffs have read the bill or understand what is in it. Instead, they seem to be scrambling over themselves to vote for it out of a fear that the American public will think them weak and soft on terror.

"The reason why the Democrats have not been doing very well on these issues, however, is that the public does not believe that they stand for anything other than echoing what the Republicans have been doing with a bit less conviction. If the Republicans are now the Party of Torture, the Democrats are now the Party of 'Torture? Yeah, I guess so.' Not exactly the moral high ground from which to seek office.

"The Democrats may think that if they let this pass, they are guaranteed to pick up more seats in the House and Senate. But they will actually win less seats this way. For they will have proved to the American people that they are spineless and opportunistic-- that, when faced with a genuine choice and a genuine challenge, they can keep neither our country nor our values safe."

"Who are these people? Who are these useless hanks of bone and fat that call themselves Senators of the United States? Let’s call them what they really are, let’s speak the truth about what they’ve done today with their votes on the bill to enshrine Bush's gulag of torture and endless detention into American law.

"Sold our liberty to keep their coddled, corrupt backsides squatting in the Beltway gravy a little longer.

"Cowards and slaves, giving up our most ancient freedoms to a dull-eyed, dim-witted pipsqueak and his cohort of bagmen, cranks and degenerate toadies. For make no mistake: despite all the lies and distorted media soundbites, the draconian strictures of this bill apply to American citizens as well as to all them devilish foreigners.

"Traitors to the nation, filthy time-servers and bootlickers, turning America into a rogue state, an open champion of torture, repression and terror.

"Threw our freedom on the ground and raped it, beat it, shot it, stuck their knives into it and set it on fire.

"If there was an ounce of moxie left in the American system, these white-collar criminals would be in shackles right now, arrested for high treason, for collusion with a tyrant who is gutting the constitution, pushing terrorism to new heights and waging an unholy, illegal war of aggression that’s killed tens of thousands of innocent people and bled our country dry.

"There is no honor in them. There is no decency, no morality, no honesty – nothing but fear, nothing but greed, nothing but base servility. Cringing, wretched little creatures, bowing to the will of a third-rate thug and his gang of moral perverts. This is their record. This is their doing. This is the shame they will have to live with. And this is the darkness, rank, fetid and smelling of blood, that now covers us all."