. . . And One Woman's All-American Horror Story 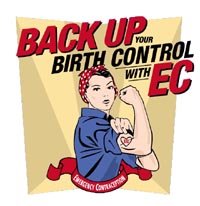 How's this for a nightmare scenario: Except for when you had children, you've been on birth control since which you were a teenager, but it's screwing up your body big time.

So you rely exclusively on condoms, but one breaks. Not to worry, you tell yourself. Emergency contraception (EC) is now available in the United States without a prescription or doctor's intervention.

We'll let a woman who calls herself "BB" pick up the story from here:

I'm stunned. I'm utterly, completely stunned. I'm shaky and anxious and shocked beyond belief. I live in rural Ohio and I have been denied EC. . . .

Friday night the condom broke. But I didn't panic, I thought to myself, with a huge sigh of relief, "Wow, thank goodness it's over the counter now!" and I fell asleep (since there are absolutely no 24 hour pharmacies within 100 miles of me). Saturday morning I awoke and phoned the pharmacy. I asked them about EC and was told that they won't be stocking it until January 1st, until then it was still by prescription only.

Soooo, I phoned my doctors office which informed me that the office was closed and that I had to call the local hospital and have her paged in order to reach her on the weekend. So I called her and had them page her. A little while later she called back and I answered the phone immediately. She sounded tired and really grumpy; I apologized for having to page her for a thing like this and then asked her if I could get a prescription for EC. She explained that I needed to go to the Emergency Room to get it.

My heart fell, the ER has a 100$ co-pay attached to it. "Well," I thought to myself, "that's still better than the price of a kid," so I called the Emergency Room to verify the information and to ask what their procedures were. When I called the hospital they transferred me to the ER. I asked the nurse what the procedure was for EC and what would be the best time to come down there (I didn't want to wind up behind 3 critical people and end up waiting for 12 hours). The nurse responded in a small, questioning voice, "EC?" and so I explained. "Yes, Emergency Contraception. Plan B. You know, right?"

A few moments later another nurse answers the phone. "Can I help you?" he says.

"Sure," I reply, becoming decidedly nervous.

He puts me on hold and I sit on the edge of the bed frowning and fiddling with a pen. I wait on hold for 15 minutes before he finally comes back on.

"Have you talked to your doctor?" he asks.

"Yes, I talked to her this morning and she told me to go to the ER," I reply.

"No, not really. We don't really have this happen much," he replies and then he says, "Well, I called the pharmacy to ask them because I had heard that it was going over the counter. They told me that they won't sell it til the first of the year." I finished the sentence with him and explained that I had called the pharmacy first thing this morning and was told the very same thing.

"Well see," he begins, his voice dropping a little, "the problem is that you have to meet the doctor’s criteria before he'll dispense it to you."

My face changes expression and I hurry to explain, "No, no," I said, "No. I haven't been raped. This was consensual sex."

"No. I have not been raped. The condom broke," I state, becoming very frustrated at this point and wondering what the hell is going on.

"Ok, well ummm . . . Are you married?" he mumbles the words so low I can barely hear them.

Suddenly I get this image of the poor nurse standing at the hospital reading from a cue card that was given to him by a doctor.

"No," I state plainly. "I am not married. I've been in a relationship for several years and I have three children, I don't want a fourth," I respond tersely.

"Oh, I see," he says and then he hurries on, "Well, see. I understand. I want you to know that I understand what you're saying. But see, the problem is that we have four doctors here right now but only one of them ever writes EC prescriptions. But see, the thing is that he'll interview you and see if you meet his criteria. Now, I called the pharmacy but I also talked to him and well . . . (clears throat) . . . you can come down and try to get it. You know, if you meet his criteria he'll give you a prescription, I mean, there's really no harm in trying." The nurse trails off, his voice falters as I realize what I'm being told.

I sigh and thank him before hanging up. I know exactly what he was telling me. If I wasn't raped and wasn't married then too damn bad for me.

Folks, the condom broke Friday night and I searched all weekend for someone who could prescribe me EC. It is now Monday and I have to report that I have been unable to find anyone who will write me a fucking prescription for EC. None of the hospitals in the surrounding counties would write it for me. I stopped my search at about 100 miles from my home because my telephone book wouldn't take me out any further than that.

I have been asked about my sexual practices. Whether I'm "monogamous" or "in a relationship," if I'm married, if I have kids, how many kids I have, if I was raped or "traumatized," but there wasn’t' one question about my health. Not one. The few places that said that they had a doctor who would occasionally write prescriptions for EC told me that I had to ask for that doctor specifically and then they proceeded to tell me that I would be "interviewed" to see if I meet that doctors "criteria" and then they proceeded to ask me all the above questions before telling me that I should "try anyway" and I "might be able to talk him into it."

Well, quite frankly I don’t know, it seems that there is no moral to the story other than morality clauses fucking suck. I’m off to smoke a carton of cigarettes and suck down more butter rum so stick that in your morality pipe and smoke it you dirty bastards. Oh, and if I end up having to get an abortion I’ll ask if I can keep the little parasite and I’ll be sending it to each of you who denied me EC.

Thanks a million, guys.

Posted by Shaun Mullen at 2:26 AM
Email ThisBlogThis!Share to TwitterShare to FacebookShare to Pinterest

I believe that the emergency pill should be used very carefully, if your raped yes I feel you should get the pill, ALSO be tested for any sexual transmitted diseases.

I also feel it should be available for child abuse, incest, and girls forced into a life on the streets. Many women are low income in Canada, and some are trying to escape domestic violence. Many have been killed, some were killed during a pregnancy. I do value human life, and it it very sad to see people abuse a human life. I personally can tell you if I got pregnant during my rape I would not be sending this email to you today. I would not have been strong enough to have that in my life. He would have been able to see the child also and have rights to the child. This was a serial rapist, and he had more rights than I did in my country. He also abused that and threatened my life. Can you imagine what he would have done to me if he found out I may be pregnant? I would have been murdered are forced to carry his child.