The United States of Torture 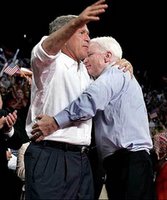 People have told me that I'm a pretty smart guy, but I'm having a hard time understanding why my beloved USofA would want to stand tall with nations like Egypt, Kazakistan, Saudi Arabia and Sudan that brutalize people in the name of justice.

The Torturer in Chief got his way and will soon be signing a draconian terrorist torture-trial bill into law. The president likes to say that he channels the wisdom of Jesus, himself a victim of unspeakable torture, so I guess I'll have to go back to the Bible and try to figure out where it says that torturing thine enemies, let alone a peace-preaching dude like JC, is okey-dokey.

* * * * *
I was so saddened the other day over John "I Once Was a Maverick" McCain's so-called compromise with the White House on the torture bill that I could not bring myself to blog on it.

Well, I've slept on it a bunch and I'm only slightly less sad -- and a whole lot angrier, but that is directed more at the Torturer in Chief than McCain himself, although I'm not letting him off of the hook, either.

Politics is a series of trade-offs, and I believe that McCain understood what has only become apparent to me after my long stew:

The Torturer in Chief nearly ruined McCain's political career by having Karl Rove float rumors during the 2000 presidential campaign that he was emotionally unstable.

The T in C could have gone to his dirty trick bag again, possibly dashing any hope that McCain could capture the Republican presidential nomination in 2008, and as it is he will unmercilessly slam the Democrats who stood their ground and voted for upholding America's core values and against torture as being soft on terrorism.

* * * * *
I don't naturally gravitate to conservative Republicans, but I've long felt a fudamental decency in McCain that is all too rare on Capitol Hill.

Maybe spending six years in the Hanoi Hilton, the notorious North Vietnamese POW camp, after his Navy fighter jet was shot down, had a clarifying influence. (Although the guy was tortured while in captivity, for cryin' out loud!) Maybe being the son and grandson of respected Navy admirals and being the rare politician to have not one but two children in the military is a part of it.

But more than anything, I have admired McCain's willingness to stand up to this imperial presidency.

Which is why, on the one hand, I find his capitulation on the torture bill and more recently the bill's habeas corpus provision is so troubling, but on the other hand acknowledge that McCain may understand better than anyone that he's the only Republican who may be able to prevent a hair-on-fire right-wing Christianist from seizing the party's presidential nomination and, God forbid, being elected.

For that reason -- and that reason alone, and presuming that my hunch is right -- I'll give John McCain some slack on this one. Meanwhile, the Torturer in Chief has now booked a one-way ticket to Hell.

Jesus told me so.