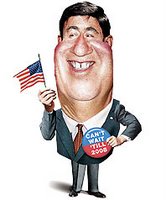 There have been and will continue to be relatively few posts on the U.S. mid-term elections at Kiko's House because I frankly don't think it matters a whole lot who wins what where.

But the tilt between incumbent Republican Senator George Allen of Virginia and upstart Democratic challenger James Webb has held my attention because of Allen's predeliction for pissing in his own hat and the possibility that he's turned a cakewalk into a defeat.

There was Allen kissing up to Confederate Civil War groups. There was and is Allen's habit of putting his foot in his mouth and saying offensive things on the campaign trail, most infamously calling an Indian student in the predominately white audience at a campaign event a "Macaca," a derisive term for a dark-skinned North African.

Wait. It gets better:

During a campaign debate with Webb the other day, Allen stated that his mother was "French-Italian with a little Spanish blood in her. And I was raised as she was, as far as I know, raised as a Christian."

Allen knew that his mother was raised a Jew. Depending upon the story and who's telling it, Mama Allen had wanted to keep her ancestry a secret to protect her children from living with the fear that she had experienced during World War II. Or Papa Allen, famed Washington Redskins Coach George Allen, wanted to keep his wife's background a secret because he knew that his mother would disapprove of him marrying a Jew. Or something.

While I might be inclined to give Allen a pass for trying to steer clear of family sensitivities, he gets a kick in the ass for lying about something he didn't have to lie about, and was going to come out sooner or later anyway. (It was the Forward, a New York City Jewish newspaper, that broke the story.)

Allen has been misrepresenting his background for years, and I conclude that this has as much to do with him being uncomfortable with or ashamed of his Jewish heritage as being a dutiful son. After all, his political base is firmly in the white Christian right wing.

George Allen wants to be president someday. He's such a liar that he might actually succeed. The question is, did he learn the term "Macaca" from his mother?

Meanwhile, more here on the kerfuffle.
Posted by Shaun Mullen at 3:38 AM
Email ThisBlogThis!Share to TwitterShare to FacebookShare to Pinterest