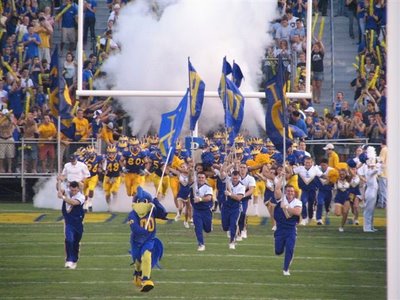 Longtime visitors to Kiko's House know that Yours Truly is a man of many interests, but until now you didn't know that my secret passion is college football.

I'm not talking about the mega-programs like the Penn State Nittany Lions, Notre Dame Fighting Irishmen, Michigan Wolverines or USC Trojans, who on a given Saturday could hold their own against many a professional team.

No, my hot spot is small college football and the University of Delaware Fighting Blue Hens in particular. The players are smaller and the stadium is comfier, but the fans no less enthusiastic.

I come by this passion honestly. Delaware is a very small place and the Hens are the closest thing to a state team.

My Uncle Jim was captain of U.D.'s undefeated 1942 team before joining the Marines and fighting his way through the Pacific in World War II. My father was headed to U.D. on a football scholarship before a career ending injury. My good friend Ralph was captain of U.D.'s undefeated 1971 national championship team. I have been a season ticket holder for years and Kiko's House is a relatively short walk to Delaware Stadium.

When the Blue Hens burst into the stadium for the start of the 2006 season on Saturday night, there will be 115 years of tradition on the line. The Hens (named for Revolutionary war game chickens that local troops took with them into battle) have won an unprecedented six national titles, most recently in 2003, and are a perennial small college football power.

Delaware is the only program in its national division to average more than 20,000 fans per regular season game and outdraws many larger programs. It has sent many players to the National Football League, most famously quarterback Rich Gannon, who helped win a Super Bowl for the Oakland Raiders, was the NFL's Most Valuable Player and two-time Pro Bowler.

Posted by Shaun Mullen at 2:21 AM
Email ThisBlogThis!Share to TwitterShare to FacebookShare to Pinterest