Iraq IV: Theater of the Absurd 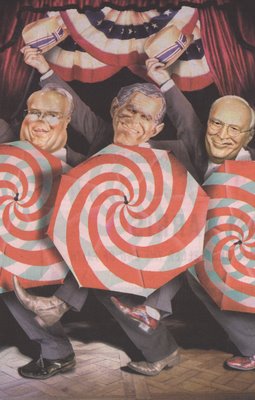 Back in May, Kiko's House readers were given a sneak peek at Frank Rich's "The Greatest Story Ever Sold: The Decline and Fall of the Truth From 9/11 to Katrina."

The Penguin Press has finally released the New York Times columnist's opus, and Ian Buruma, a professor at Bard College, reviews it in The Times Book Review.

"[Early in the war] — and this is where Rich is particularly acute — most serious papers published the White House claims on their front pages, and buried any doubts in small news items at the back. Political weeklies with a liberal pedigree, like The New Republic, fell in line with the neoconservative Weekly Standard, stating that the president would be guilty of 'surrender in the war on international terrorism' should he fail to make an effort to topple Saddam Hussein. Bob Woodward, the scourge of the Nixon administration, wrote 'Bush at War,' a book that seemed to take everything his White House sources told him at face value. . . .

"How could this have happened? How could some of the best, most fact-checked, most reputable news organizations in the English-speaking world have been so gullible? How can one explain the temporary paralysis of skepticism? This is perhaps the most painful question raised by Rich’s book, since his own newspaper was clearly implicated. An air of intimidation, which hung over the United States like a noxious vapor after 9/11, is part of the explanation. Susan Sontag became a national hate figure just for saying that United States foreign policy might have had something to do with violent anti-Americanism. When John Ashcroft declared to the Senate that people who challenged his highly questionable policies 'give ammunition to America’s enemies,' he was simply echoing the ranters and ravers of talk radio. But they are poisonous buffoons. He was the attorney general. No wonder that the mainstream press, after being continuously accused of 'liberal bias, preferred to keep its head down. . . .

Bob Woodward, one of Rich’s chief bêtes noires, has more access in Washington than any journalist, but the weakness of his work is that he never seems to be better than his sources. As Rich rightly observes, “reporters who did not have Woodward’s or Miller’s top-level access within the administration not only got the Iraq story right but got it into newspapers early by seeking out what John Walcott, the Knight Ridder Washington bureau chief, called ‘the blue collar’ sources further down the hierarchy.” This used to be Woodward’s modus operandi, too, in his better days. Fearing the loss of access at the top and overrating the importance of quotes from powerful people, as well as an unjustified terror of being accused of liberal bias, have crippled the press at a time when it is needed more than ever. Frank Rich is an excellent product of that press, and if it ever recovers its high reputation, it will be partly thanks to one man who couldn’t take it anymore."

(Illustration by Ray Bartkus/The New York Times)
Posted by Shaun Mullen at 3:23 AM
Email ThisBlogThis!Share to TwitterShare to FacebookShare to Pinterest