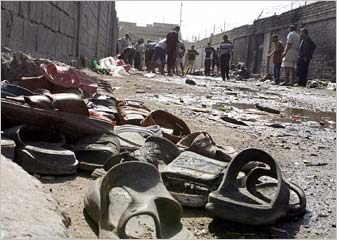 Clearance sale of victims' shoes after Baghdad bomb blast.
Public primary schools are opening in Baghdad for the fall term and the minister of education has announced a new motto: "School Children Against Terror."

This frosted Zappy, a Baghdad blogger who writes at Where Date Palms Grow:

"I mean is this stupidity or what?

"He is planning guarding the schools by Iraqi National Guard and police, making them really good target. I wonder where his children go to school? Surely not in ."

Meanwhile, enrollment is way down and only one student out of 600 showed up at Omar bin Abd Alaziz, a school for boys.

The reason, of course, is because of bombings, kidnappings and death squad assassinations.

Meanwhile, Namja is studying for university exams in Mosul, but is having some problems. Three and a half years after the U.S.-led invasion, there is only intermittent electricity in her neighborhood and none recently. A neighbor was generous enough to share power from his generator, but it conked out.

"I'm studying by a battery-generated light and am getting sleepy and discouraged. Studying in the dark is no fun at all.

"Mom took her mobile-charger to the university today to charge her phone, since she's not sure she'll be able to do that at home any time soon.

"The only one who actually enjoys the power outages is my little niece, Aya, who just loves to play with her shadow nowadays. She used to be afraid of her shadow, but, like all of us, she has grown accustomed to new visitors.

"All I ask for now is a prayer, for a little bit of luck to the poor people of my neighborhood in these dark, dark, dark days."

(Photography by Ali Abbas/European Pressphoto Agency)
Posted by Shaun Mullen at 12:09 AM
Email ThisBlogThis!Share to TwitterShare to FacebookShare to Pinterest