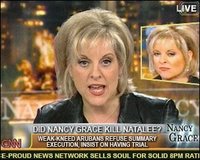 Score a direct hit for CNN talk show host Nancy Grace: The suicide of a 21-year old mother they day after she grilled her mercilessly over the disappearance of her two-year-old son.

During the interview with Melinda Duckett, the famously prosecutorial Grace who pounded her desk and demanded to know:

"Where were you? Why aren't you telling us where you were that day?"

Duckett's gunshot death deepened the mystery of what happened to the boy, Trenton, who apparently was snatched from his crib in a bedroom of her home in Leesburg, Flordia.

Police have refused to say whether the mother left a suicide note, and said nothing they have found so far in their investigation of her death has shed light on the whereabouts of the child.

Investigators have stopped short of calling Duckett a suspect but have focused increasing attention on her movements just before the boy vanished. Family members disputed any suggestion that she hurt her son. They said that the strain of his disappearance pushed her to the brink and the media sent her over the edge.

"Nancy Grace and the others, they just bashed her to the end. She wasn't one anyone ever would have thought of to do something like this. She and that baby just loved each other, couldn't get away from each other. She wouldn't hurt a bug."

Janine Iamunno, a spokeswoman for Grace, said in an e-mail that Duckett's death was "an extremely sad development," but that the program would continue covering the case.