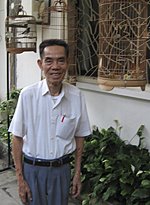 Pham Xuan An, who led a double life as a Time magazine reporter during the Vietnam War while spying for North Vietnam, has died.

An, Time's only Vietnamese full staff correspondent, covered American and South Vietnamese military and diplomatic news and had access to off-the-record briefings by American authorities while feeding military documents and other information to his North Vietnamese spymasters.

He held the rank of colonel in the North Vietnamese Army and was promoted to general upon retiring.

“He was among the best-connected journalists in the country. It was always An who would brief new correspondents; it was An whom even the competition sought when trying to unravel the hopelessly complicated threads of Vietnamese political loyalties.”

A native of Saigon, An became a courier for the Vietminh, the Communist national liberation movement, at age 16 and infiltrated the South Vietnamese Army after the French occupation ended in 1954 and the country was divided. Two years later, he received a U.S. State Department scholarship to Fullerton College in California, where he studied journalism. He returned to Saigon and worked for The Associated Press and Reuters before joining Time in 1965.

As Saigon fell, he persuaded U.S. officials to evacuate his family and some friends, but he remained behind.

He had no regrets about his double life:

“The truth? Which truth? One truth is that for 10 years I was a staff correspondent for Time magazine . . . The other truth is that I joined the movement in 1944 and in one way or another have been part of it ever since. Two truths — both truths are true.”

Posted by Shaun Mullen at 2:24 AM
Email ThisBlogThis!Share to TwitterShare to FacebookShare to Pinterest