The Republican Party Revs Up the Slime Machine 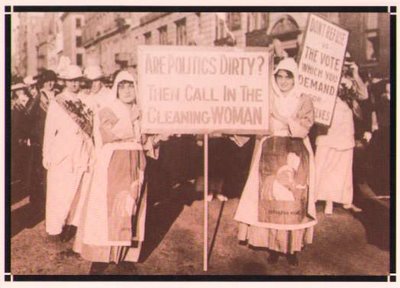 The Republican Party has concluded it can't win in November on the issues, so that leaves it only one alternative:

With less than 60 days before Election Day, Republicans are planning to spend 90 percent of their $50 million-plus war chest on negative ads based on anything damaging or embarrassing that they can dig up about Democratic candidates for the Senate and House.

The bulk of the negative ads will be delivered by party committees, a strategy that allows candidates to distance themselves from the trash talk.

The Washington Post cites this example in Wisconsin's 8th District:

"Earlier this summer, the NRCC [National Republican Congressional Committee] sent a young staff member to the district for one week to look through court records, government and medical documents, and local newspapers to find embarrassing information about physician Steve Kagen, one of the leading Democratic candidates in an important swing district, an NRCC aide said. The researcher discovered that Kagen's allergy clinic has sued more than 80 patients, mostly for failing to pay their bills.

Then there's the ethically challenged Rick Santorum, the right-wingnut senator from Pennsylvania who is fighting for his political life.

Santorum is airing a sleazy attack TV ad that features actors in an effort to to tie his Democratic opponent, state treasurer Bob Casey, to corrupt characters.

Trouble is, none of the Casey backers vaguely alluded to in the ad have had anything to do with Casey in years, and one is dead.

Dick Polman, a The Philadelphia Inquirer's national political columnist, says the GOP will also attack Rep. Nancy Pelosi at every opportunity. Pelosi, the liberal California Democrat, is in line to become majority leader if the Democrats win back the House.

"It’s impossible to predict whether this demonization strategy will work, but she potentially provides the GOP with ample raw material: She represents a liberal and affluent San Francisco district, she votes for gun control and abortion rights, she was an early supporter of Iraq troop withdrawal, and some allies even fret that she comes off as too sophisticated for the average voter (remember the pictures of John Kerry wind-surfing?)"

FLOATING THE SWIFT BOAT
Bob Perry, the man behind the Swfit Boat Veterans For Truth, is one of the most despicable men in politics. He's also filthy rich and has put $5 million into a group with the misleading name of the Economic Freedom Fund.

The fund has already dropped a half million large on negative TV ads against incumbent Democratic congressmen in West Virginia and Georgia.

Republican Rep. Bob Ney of Ohio won't be airing any negative TV ads this fall. He has pleaded guilty to federal charges in the investigation into corruption and bribery involving disgraced super lobbyist Jack Abramoff.

Under a plea bargain, Ney will do 27 months in prison if he continues to cooperate with investigators.

More here.
'THE BEST POLITICAL SPOUSE IN THE BUSINESS'
Former Senator Bob Kerrey, the Nebraska Democrat, suggests in a New Yorker profile (not available online) on Bill Clinton about why wifey will run for president:

"I think it's ninety-nine percent certain that Hillary will run, but that one percent is where the world lives. She's got everything to run: the intellect, the money, the people, the national campaign -- and she has the best political spouse in the business. If I were running for President, you can bet that I'd want Bill Clinton as my spouse -- even if it meant a change in sexual orientation! He's good at everything. He'll get huge crowds wherever they send him, and, remember, a Presidential campaign gets ten requests for everyone one that you can do. The most important media you get in a Presidential campaign is the free media, and I've got to think he is worth two hundred million in free media."

Posted by Shaun Mullen at 3:01 AM
Email ThisBlogThis!Share to TwitterShare to FacebookShare to Pinterest