The Iraq War & A Tale of Three Foxes 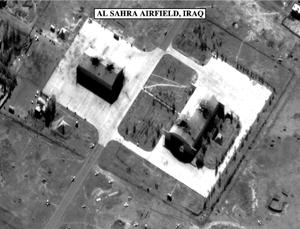 Iraqi airfield remodeling during Desert Fox.
The much maligned man who led the U.S. for eight of the 12 years between the two Iraq wars is making the TV talk show rounds these days, including a stopover at CNN for the obligatory pillow fight with that ruff tuff Larry King and a harder hitting sitdown (*) with Fox News's Chris Wallace.

The Fox News tilt has gotten wide publicity because a second fox known as Bill Clinton wouldn't let Wallace pull the usual rabid dog trip on him. It also was an opportunity for everyone who still has a grudge against the former prez to air out the usual grievances. Or speculate on whether his roadshow hurts or helps wifey, or whether he will be able to redeem his legacy, or whether he can save the world, or . . .

Funny about the comparisons between the Clinton and Bush eras.

One of the grievances against Clinton is that he went easy on Saddam Hussein, and because of that the Bushies had no choice but to invade Iraq.

Well, this is just stone cold inaccurate and a third fox, a 1998 military operation against Iraq called Operation Desert Fox, puts the lie to that.

Desert Fox is easy to forget because the economy was humming along quite nicely at home and there was the distraction of the Clinton-Lewinsky scandal.

Desert Fox also is something that you want to forget if you're a Bush disciple because it gets in the way of the White House's bogus pretext for the 2003 invasion, which is looming large with the war and terrorism now receiving top billing by voters in recent public opinion polls.

Desert Fox, launched at the order of Clinton, was a reaction to a standoff with Saddam Hussein over weapons inspections.

It began on December 16, 1998, with over 200 cruise missile launches from Navy ships and B-52 bombers. On the second day, another 100 cruise missiles were launched, and on the third night, B-1 bombers made their first combat sorties. A total of 415 cruise missiles were used, more than employed during the entire 1991 Gulf war, and 91 sites were hit, including those presumed to be used for the production and storage of WMDs and the missiles that could deliver them.

The Clinton bashers poo-pooed Desert Fox and said it was merely a scheme to distract attention from forthcoming impeachment proceedings, and at the time the operation did seem to be an exercise in overkill.

But as Thomas Ricks states in his authoritative new book, "Fiasco: The American Military Adventure in Iraq," the raids proved to be "surprisingly effective" and severely demoralized Saddam and destabilized his regime.

"[Marine General Anthony Zinni, the chief of the U.S. Central Command] was amazed when Western intelligence assets in Baghdad reported that Desert Fox nearly knocked off Saddam Hussein's regime. His conclusion: Containment is clearly working, and Saddam Hussein was on the ropes. A U.S. military official, looking back on Desert Fox years later, confirmed that account. 'There were a lot of good reports coming out afterward on how he changed his command and control, very quickly. It was especially clear in areas involving internal control.' Interceptions of communications among Iraqi generals indicated 'palpable fear that he was going to lose control.' "

THE NEOCONS EAT CROW. NOT.
The relative success of Desert Fox, especially in the context of a three and a half year old 2nd Gulf war that has been a catastrophic failure, should be an opportunity for the neoconservative war architects and hard-core war supporters to eat crow.

Richard Perle, a Bush administration insider and leading war cheerleader, deserves special scorn in this regard for arguing that Clinton administration softies were risk averse and had allowed Saddam to become more powerful through a policy too heavily weighted toward containment.

But as Ricks writes:

"Perle made those assertions in July 2003, just about the time they were becoming laughable to those who understood the situation on the ground in Iraq.

". . . [General] Zinni's conclusion was that U.S. policy on Iraq succeeded in the late nineties.

'Containment worked. Look at Saddam -- what did he have?' Zinni asked later. 'He didn't threaten anyone in the region. He had a deteriorated military. He wasn't a threat to the region.' What's more, he said, it wasn't a particularly costly effort. 'We contained , day-to-day, with fewer troops than go to work every day at the Pentagon.' "

(*) You can judge for yourself if Clinton got the better of Wallace. Here's a transcript of the Fox News fisticuffs.
Posted by Shaun Mullen at 3:20 AM
Email ThisBlogThis!Share to TwitterShare to FacebookShare to Pinterest