Iraq: James Baker to the Rescue? 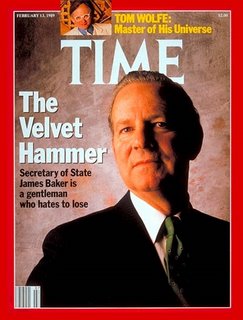 President Bush has quietly made former Secretary of State James Baker one of his primary advisers on .

The move is significant in three respects:

* It is indicative of the dire straits that the president finds himself in regarding a war that has spun out of contol.

* Baker is an ideological opposite of Vice President Cheney and Defense Secretary Rumsfeld, whose stage management of the war has been disastrous. Cheney and Rumsfeld, drunk on neocon Kool Aid, believed that democracy could be imposed on the Iraqi people at point of gun, while Baker privately believes that the war was a mistaken to begin with.

* Baker's closest friend is the president's father, who has been appalled at his son's conduct as commander in chief.

Baker has been quietly shuttling in and out of Baghdad as head of the congressionally mandated Iraq Study group, according to a story in Insight magazine, which says that he has been discussing with the president recommendations on exit strategies.

An administration source told Insight that:

"The president has understood that he needs a trusted outsider without any personal stake in policy on Jim Baker also has a lot of clout and credibility on the Hill.

"It is clear that the president will make his decision based on his own judgment," the source said. "But there are already signs that Baker has become an influence."

Baker's increasing access to the president comes amid declining confidence in Rumsfeld, whose constant reassurances that the Iraqi insurgency can be defeated now ring hollow.m

Posted by Shaun Mullen at 3:03 AM
Email ThisBlogThis!Share to TwitterShare to FacebookShare to Pinterest