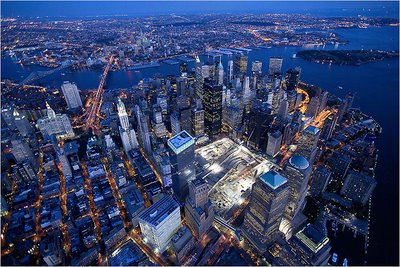 New York City and Ground Zero five years later
For me, the biggest question surrounding the anniversary of the 9/11 attacks is why there hasn't been another one over the past five years.

Is it because the Bush administration has done such a terrific job of homeland security? Because Americans are more vigilant? Because Al Qaeda has been weakened and may be incapable of launching another attack on the scale of 9/11? Because the Iraq war has been a distration for terrorists? The answer, according to an excellent New York Times article, is some of all of the above.

There is a consensus among counterterrorism officials and independent experts that the government’s actions over the last five years — from the dismantling of camps run by Al Qaeda and the decimation of its leadership, to the tightening of visa and border controls, to the scores of terrorism-related prosecutions — have made the country a harder target.

The Age of Terror, at least inside the United States, has morphed into the Age of the Foiled Plot. But this very success has led to a new debate. The government says the record vindicates its prevention strategy — to intervene long before an attack is imminent. Its critics assert that officials have exaggerated the threat posed by some accused plotters, painting hapless misfits as Qaeda operatives.

None of this means that a serious plot isn’t being hatched now, invisible even to a counterterrorist bureaucracy hugely expanded since 2001. But five years of evidence suggests that the terrorist threat within the United States is much more modest than was feared after 9/11, when it seemed quite possible that there were terrorist sleeper cells in American cities, armed with “weapons of mass destruction” and awaiting orders to attack.

REMEMBERING THE 2,996
The 2,996 Project is a worthy effort led by a guy by the name of D. Challenger Roe to remember the victims of the 9/11 attacks through personal remembrances.

He reminds us that we know the names of the attackers, but not the victims. He's right. I could only come up with three, including Todd Beamer, the passenger who helped overcome the hijackers who planned to fly United Airlines Flight 93 into the nation's capital, and that's probably two more than most folks.

Meanwhile, The New York Times, in interviews with the families of the victims, finds that many are still grieving, but have found constructive ways of moving on without forgetting. More here.

These families were initially interviewed for The Times' Pulitzer Prize-winning "Portraits of Grief Project," which can be read here.
'SAFETY IS IN THE EYE OF THE BEHOLDER'


I quit the newspaper biz three months before the 9/11 attacks and felt particularly helpless the morning they occurred. Kind of like a fireman confronted by a conflagration without a hose. But Will Bunch, who sat a couple of desks away from me in the newsroom, was on the job.

An excerpt from Will's essay on the anniversary of the attacks:

As you reflect today on the deadly terrorist attacks . . . and everything that has happened in America and around the world in the five years since then, you probably didn’t think of Philly’s soaring crime rate, or a commercial aviation disaster from human error.

But maybe you should.

Because one of the many effects of 9/11 — seldom mentioned — is that when the White House declared a “war on terror” and America made that the No. 1 priority, other issues began to get short shrift, some that had dominated the national agenda during a very different 1990s.

On Sept. 12, 2001, the , in a story written by this reporter, predicted that “America would never be the same again.” That prediction was right, but in ways both large and small that no one anticipated. Few predicted that Americans would still be fighting and dying halfway around the world in five years, that there would be curbs on civil liberties or that a nation that came together in tragedy would now be torn asunder by political rancor.

More here.
IS BIN LADEN DEAD?
Jonah Goldberg over at The Corner thinks so because the Bearded One did not issue a 9/11 videotape, but it's gonna take a whole lot more than that to convince me.

It was on that date in 1565 that a tiny contingent of European knights and the entire population of Malta dealt Ottoman Turkey a decisive defeat, and in doing so may have saved western civilization.

(Hat tips to Dan Rubin at Blinq for the 2,996 Project and Glenn Reynolds at Instapundit for Bin Laden and 9/11/1565. Photograph by Vincent Laforet/The New York Times)
Posted by Shaun Mullen at 5:20 AM
Email ThisBlogThis!Share to TwitterShare to FacebookShare to Pinterest