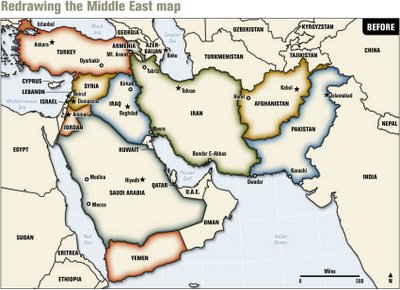 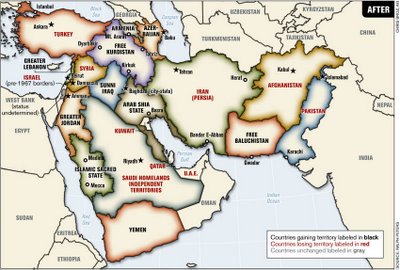 It is beyond dispute that a major reason the Middle East is such a screwed up place is that the borders of many of its countries were drawn by self interested Brits and Frenchmen who didn't give a fig about historic ethnic, tribal and religious considerations. Iraq is Exhibit A in that regard.

The first thing I noticed is that Iran, which is at the heart of the region and in some respects at the heart of its dysfunctionality, shrinks somewhat. Iraq, on the other hand, is chopped up into Shia, Sunni and Kurdish states and ceases to exist, while Israel returns to its pre-1967 war borders.

The astute Joe Gandesman, who picked up Peters' cutting and pasting at The Glittering Eye, makes a big point that is not immediately obvious in stating that he wished that Peters had paid a little more attention to natural resource issues, particularly oil, water, and transportation. Under his redraw, the new Saudi and Sunni Arab Anwar state are largely without resources.

So why doesn't Iran take a bigger hit?

Peters explains that it is a state with "madcap" boundaries. It would lose a great deal of territory to Unified Azerbaijan, Free Kurdistan, the Arab Shia State and Free Baluchistan, but would gain the provinces around Herat in today's Afghanistan — a region with a historical and linguistic affinity for Persia. Iran would, in effect, become an ethnic Persian state again.

Peters concludes by noting that correcting borders to reflect the will of the people may be impossible in the short term.

But given time — and the inevitable attendant bloodshed — new and natural borders will emerge. Babylon has fallen more than once. . . .

From the world's oversupply of terrorists to its paucity of energy supplies, the current deformations of the Middle East promise a worsening, not an improving, situation. In a region where only the worst aspects of nationalism ever took hold and where the most debased aspects of religion threaten to dominate a disappointed faith, the U.S., its allies and, above all, our armed forces can look for crises without end. While Iraq may provide a counterexample of hope — if we do not quit its soil prematurely — the rest of this vast region offers worsening problems on almost every front.

If the borders of the greater Middle East cannot be amended to reflect the natural ties of blood and faith, we may take it as an article of faith that a portion of the bloodshed in the region will continue to be our own.

I first noted in a post in July that it may be time to think the unthinkable in Iraq, and that means deciding whether centuries old sectarian animosities are so great that there never can be an effective government of national unity.

Iraq's borders are substantially a result of a secret partition between the British and French in 1916 that had nothing to do with historic or sectarian considerations and everything to do with staking out spheres of post-World War I influence. The partition is recognized as a turning point in relations between the West and Arab peoples, which is to say that it has pretty much been all downhill since.

Well, 90 years later a partitioning of the warn-torn country doesn't seem so far fetched. At least a growing number of Shiite legislators think so.

More here.
Posted by Shaun Mullen at 3:13 AM
Email ThisBlogThis!Share to TwitterShare to FacebookShare to Pinterest