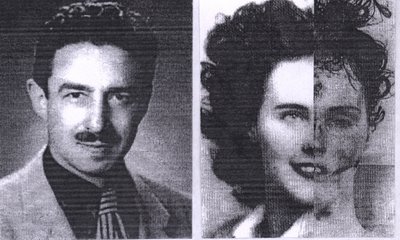 On January 15, 1947, a 22-year-old beauty by the name of Elizabeth Short was found brutally slain in a vacant lot off of 39th and Norton streets in Los Angeles. Her body cut in half at the waist with surgical precision, her face and breasts slit, and there was a large gash where her vulva should have been. Her body had been drained of fluids as if prepared for an embalming and she was left in a garish pose, her head turned to the side and one arm above her body.

The case became known as the Black Dahlia Murder because Betty, as the wannabe actress liked to be called, wore her hair and clothes black.

The lurid crime shook Angelenos usually inured to the rampant crime in their midst, and a huge team of detectives was assigned to track down the perpetrator. Many suspects were pursued, but all were released and the case technically remains unsolved.

Fast forward nearly 60 years to the release on Friday of Brian De Palma's "Black Dahlia," which follows two cops assigned to the case who are played by Josh Hartnett and Aaron Eckhart. It co-stars Hilary Swank, Rachel Miner and Scarlett Johansson.

Reviews of the movie are tepid and worse. Writes Manhola Dargis in The New York Times:

I won't rush out and see the movie because DePalma's recent offerings have disappointed. Besides which, I'm somewhat of an armchair expert on the Black Dahlia Murder and researched it in connection with a book I'm writing on another brutual murder. My murder also does not lack for suspects and hasn't been solved.

I was involved in my share of homicide cases during a long newspaper career. (You haven't really lived until you've stood in a morgue and watched a coroner in a white lab coat open one of those stainless steel drawers and slides out a sheet-covered corpse. Yup, just like in the movies.) I also read perhaps 20 true-crime books before in order to steep myself in investigative methodology and police jargon before I began writing my tome.

Steve Hodel's "Black Dahlia Avenger: A Genius For Murder" (*) was the best of the true-crime batch, although it was the least well written.

As for literary pretension, it certainly cannot be compared to the "Black Dahlia," the first of the novels in James Ellroy's acclaimed "L.A. Quartet" and the book on which the De Palma flick is based. But "Black Dahlia Avenger" is a stemwinder and any excuse to tout it -- even the release of a mediocre movie -- is good enough for me.

Steve Hodel was a career Los Angeles Police Department detective and the model of the good cop. He was retired in 1999 when Dr. George Hodel, the brilliant but troubled father from whom he had been estranged for most of his adult life, died at age 91.

Among his father's personal effects was a small, palm-sized photograph album, and the doctor's wife -- the last of four -- thought that the son should have it.

Among the photos were Hodel as a child on his father's knee, Hodel's mother and two photos of a young Eurasian woman that Hodel, to his horror, recognized as Kiyo, his own former wife. Yet Kiyo is much younger in the photos than Hodel ever saw her and can only be a Kiyo whom his own father had known years earlier.

The mystery deepens when Hodel looks at two photos of another young woman -- a white woman with two flowers in her black hair, her eyes cast down. He wonders if she was asleep when the photos were taken. Or dead.

Hodel is struck by the face but can't remember why until he later realizes that the flowers are dahlias and the woman could be . . . you guessed it, Elizabeth Short.

George Hodel (left photo) was tall, dark, suave and handsome -- a connoisseur of fine art and women. He also was an abortionist and a big fan of the Marquis de Sade and Jack the Ripper.

Despite a lack of physical evidence, destroyed by bumbling and corrupt detectives trying to cover up a conspiracy involving crooked pols and gangsters, Hodel began working on the Black Dahlia case.

I am not spoiling the book by stating the obvious -- that the son came to believe that his father, acting out his obsession with De Sade and The Ripper, murdered Betty Short (right photo montage, with an autopsy photo superimoded). There also are intriguing indications that Ray and Houston may have been accomplices.

But that was just the start of what Steve Hodel discovered, and I won't give the rest away.

(*) A revised edition of "Black Dahlia Avenger" has just been published in paperback.

FYI, the third leg of Ellroy's quartet was "L.A. Confidential," the damned fine 1997 movie starring Kevin Spacey, Russell Crowe and Kim Basinger. Ellroy's "Black Dahlia" was dedicated to his mother, who was murdered in 1958 when he was 10, her body dumped like Betty Short's. The case remains unsolved.

she was my mother