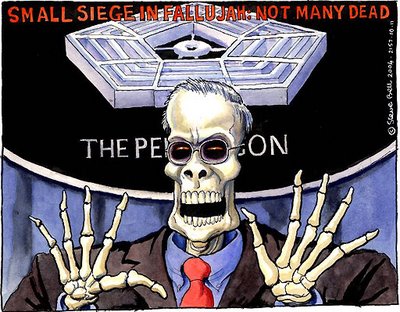 The extraordinary revolt of retired generals against Donald Rumsfeld that began last spring has spread to the inner sanctum of the Pentagon and one of the defense secretary's favored officers, General Peter J. Schoomaker, who is Army chief of staff.

As reported by The Los Angeles times, Schoomaker has thrown down the gauntlet:

In an unprecedented move following a series of cuts in the Army's funding requests by the White House and Congress, he withheld a required 2008 budget plan from Pentagon leaders last month after protesting to Rumsfeld that the Army simply could not maintain its current level of involvement in Iraq as well as other global commitments without significant troop withdrawals or billions in additional funding.

What makes the general's stand all the more extraordinary is that he has spoken out publicly about it, including a speech to the National Press Club in which he said "There is no sense in us submitting a budget that we cannot execute . . . a broken budget."

The Schoomaker-Rumsfeld showdown is in large part a result of the defense secretary's determination to wage the Iraq war on the cheap. That has had catastrophic results.

It also comes amidst bad news about the condition of the Army and services:

* There is a serious backlog at the Army's repair depots of several thousand Humvees, M1 tanks and M2 Bradley fighting vehicles, and other vehicles because of a shortage of money.

* The Army is so bogged down in Iraq and Afghanistant that only two or three of its 42 active-duty combat brigades are judged to be fully ready to deal with a crisis elsewhere.


'HE KNOWS EVERYTHING, EXCEPT HOW TO WIN'
Major General John Batiste retired from the Army last November after 31 years of service.

"I walked away from promotion and a promising future serving our country. I hung up my uniform because I came to the gut-wrenching realization that I could do more good for my soldiers and their families out of uniform. I am a West Point graduate, the son and son-in-law of veteran career soldiers, a two-time combat veteran with extensive service in Bosnia, Kosovo, and Iraq, and a life-long Republican.

"Bottom line, our nation is in peril, our Department of Defense’s leadership is extraordinarily bad, and our Congress is only today, more than five years into this war, beginning to exercise its oversight responsibilities. This is all about accountability and setting our nation on the path to victory. There is no substitute for victory and I believe we must complete what we started in Iraq and Afghanistan.

"Donald Rumsfeld is not a competent wartime leader. He knows everything, except how to win. He surrounds himself with like-minded and compliant subordinates who do not grasp the importance of the principles of war, the complexities of Iraq, or the human dimension of warfare. Secretary Rumsfeld ignored 12 years of U.S. Central Command deliberate planning and strategy, dismissed honest dissent, and browbeat subordinates to build 'his plan,' which did not address the hard work to crush the insurgency, secure a post-Saddam Iraq, build the peace, and set Iraq up for self-reliance. He refused to acknowledge and even ignored the potential for the insurgency, which was an absolute certainty. Bottom line, his plan allowed the insurgency to take root and metastasize to where it is today."