The War on Terror: We're Americans, We Torture 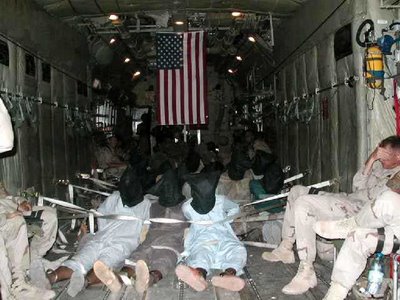 Uh-oh. The Decider and dissident Republican senators have hammered out a compromise on procedures for interrogating and trying terror suspects. I have another term for it:

The senators caved in, pure and simple. They didn't authorize the use of torture, but they didn't try to prevent it either, which means that the CIA can continue to use horror movie techniques such as sleep deprivation, waterboarding and hypothermia that the Pentagon's own lawyers have said are counterproductive and put Americans who may be captured in greater danger.

The biggest cop out is Senator John McCain, himself a torture victim while a prisoner of war in North Vietnam.

The president hailed the agreement, saying it will preserve the "most potent tool we have" in the war against terror -- the ability of the CIA to interrogate detainees and "get their secrets."

If that is the case -- and if it has been the case -- then why has the Bush administration been unable to turn all of those secrets into prosecutions? Why is its record so abysmal?

The White House can count the number of prosecutions on the president's hands and feet although it has imprisoned hundreds of terrorists and, at last count, was incarcerating an astounding 14,000 people in the Rumsfeld Gulag around the world who are beyond the reach of established law.

In fact, there has been only one major successful prosecution, that of Zacarias Moussaoui, the so-called 20th 9/11 hijacker, and that was not as a result of a CIA interrogation.

The answer as to why there have been so few prosecutions is two-fold:

* As is evident throughout its prosecution of the War on Terror, the administration has never really had a plan. As has been the case with that other war -- the war in Iraq -- it has tailored everything around political considerations, not practical ones.

* Overall, the courts have looked unkindly on the administration's extralegal antics, culminating with the Supreme Court's stinging rebuke in Hamdan vs. Rumsfeld, which is why the White House had to get Congress to agree to new interrogation and military tribunal policies to begin with.

Face it: The Bush administration has substituted thuggery for thought in the War on Terror. Its approval of the use of torture techniques is reprehensible. That Congress is going alone with The Decider is doubly so. That the Democratic Party has not spoken out forcefully is even worse.

This is a dark moment in American history. The damage done is incalculable.

IRONY ALERT
The U.N.'s anti-torture chief says that torture in Iraq may be worse now than it was under Saddam Hussein, with militias, terrorist groups and government forces disregarding rules on the humane treatment of prisoners.

More here.
Posted by Shaun Mullen at 6:31 AM
Email ThisBlogThis!Share to TwitterShare to FacebookShare to Pinterest

This is very troubling, the sense of lawlessness and disregard for any sort of standard is incomprehensible...