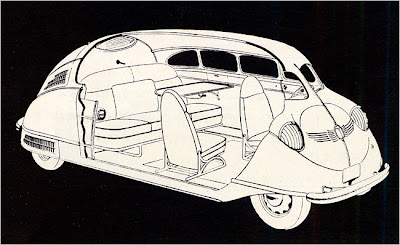 A minivan that was 60 years before its time. More here.

It's an election year, and that means sophistry and ignorance in equal measures will be flooding the airwaves and intertubes.

. . . The latest meme making the rounds -- I've seen it in the WSJ, on Kudlow's show and read it online -- is a move to blame the recent market turmoil on the rise of Obama at InTrade, or to correlate the sell-off with the declining polls for the incumbent party.

Goldman Sachs on Wednesday said it expects the U.S. economy to drop into recession this year, prompting the Federal Reserve to slash benchmark lending rates to 2.5 percent by the third quarter.


[D]espite all the happy talk from Obama about being the candidate of hope and change, I don't know that an Obama presidency would be a whole lot different, with the possible exception of Iraq. He may be a secret progressive wrapped in moderate/centrist/bipartisan rhetoric, but I'm not convinced yet that he would actually engage in promoting any policies that would radically alter the status quo. His speeches have actually referenced Republican talking points on Social Security, forgawdsake. He is tied to as many "big money" corporate interests as Senator Clinton, and nothing I've seen from him so far in his senatorial career has made me believe he would cross those "special interests" if push came to shove. I hope I would be wrong about that, but that's all it is -- hope.

-- STEVE D
It is almost obscene how much I am enjoying this election year, and it's only just begun. I love being wrong because my predictions thus far have been the kind you make in a year where the dynamics are known and oppressive, where polls not people matter.

-- AZIZ P.
There is also something else that I'm hoping Hillary's New Hampshire victory does: tamps down the breathless repetition of the "change" meme — in both phrase and concept. . . . I appreciate that Obama has seized on a compelling narrative, but the media's wholesale and uncritical acceptance and dissemination of it has left me scratching my head trying to figure out where the there is.

Living in this little internet cocoon being bombarded by the daily spin of pundits, prognosticators, "experts," and the campaigns themselves, it is quite easy to fall for a buzz that everyone – and I mean everyone – was touting.

But someone neglected to tell Hillary Clinton that her defeat was foreordained and in the stars. So the candidate continued a killer schedule and doggedly soldiered on, refusing to bow to what everyone in Chrsitendom was telling her was going to be a smashing, humiliating defeat.

One element of George W. Bush's rise to power that tends to be forgotten in retrospect is that Republicans were really looking in 2000 for someone who, though solidly conservative, didn't have a conservative voting record. Under Newt Gingrich, after all, the congressional GOP tried to implement conservatism and the voters didn't like it. But before John McCain was a maverick, he was an orthodox Republican Senator and he lived through the whole thing. If he becomes the GOP nominee, when the Democrats go through his voting record they'll find all the greatest hits from the 1996 re-election campaign -- stuff about $270 billion in Medicare cuts and tens of thousands of senior citizens forced into poverty.

That's ancient history now, so in some ways the impact will be blunted. But still, any long-serving senator faces some real risks in having random elements of his voting record dragged back out during the campaign, and as best anyone can tell rabid opposition to government services actually is something McCain believes in. How will that play out in the end? It's hard to say. But the essence of McCain's strength in the polls right now is that for years he's been attacked by the right as insufficiently loyal and sporadically praised by Democrats as a valued collaborator. If he wins, that changes, and we start hearing about a whole other side of McCain's record.

-- MATTHEW YGLESIAS
Bush apparently is planning to use his trip to define his legacy. I think I can save him the trouble. I've finally figured it out. He's really good at one thing. He sets the standard for cognitive dissonance.

The mechanization of American society is going too far. Now some soulless restaurateurs are removing the last trace of human interaction in the dining experience with tableside touch screens to send your orders directly to the kitchen and bar.

Can an emoticon replace the eager smile of the person with pad and pencil who tells you, "I'm Debbie and I'll be your server?" Will a computer menu tell you how the duck l'orange is tonight? Can a machine understand how really rare you want your steak or how dry your martini?

steven d said that, not BooMan