Rumors of Clinton's Death Are Greatly Exaggerated; McCain Rises From the Ashes 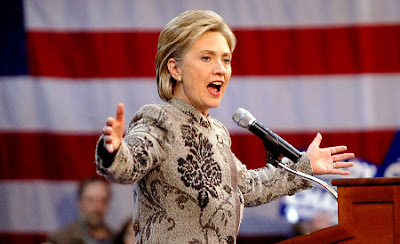 Long story short, the 25 days until Super Tuesday are shaping up to be a make-or-break period for a presidential candidate who had arrogantly campaigned as Ms. Inevitable and had to scramble to reinvent herself, and another candidate whose astounding momentum suffered a glancing blow -- if not hit a granite wall -- in New Hampshire yesterday and cannot reinvent himself.

Barely one week into a year in which Hillary Rodham Clinton would breeze to the Democratic nomination flush with a $100 million-plus war chest and then possible coronation as the first woman president, her campaign appeared to be in disarray and there were whispers that some of her advisors were lobbying her for an exit strategy.

certainly was bruised if not bowed after voters caught Barack Obama fever, but defying the polls and punditocracy, she plucked victory from the jaws of defeat for an "upset win" over the freshman Illinois senator, a term that no one would have contemplated using a few short weeks ago in this strangest of campaign seasons.

snuck by Obama by a 39 to 36 percent point margin as record numbers of those famously contrarian New Hampshire voters turned out. Many seemed to have had 11th hour epiphanies and went for the former First Lady, who put on a more human face in a weekend debate and then on Monday when her eyes teared up during a campaign appearance, and asserted rather unconvincingly in her victory speech last night that “I listened to you and in the process I found my own voice.”

Clinton did not prevail over Obama among independents -- of which there are more in New Hampshire than Democrats -- nor did young voters gravitate to her, but she won the battle of the gender gap and did significantly better among traditional Democrats. Independents and women had gone for Obama in Iowa.

The previous political wisdom, trampled into the melting snow on an unseasonably mild winter day in New England, had getting swamped by Obama.

The new political wisdom is that has a fighting chance to win the party caucus on January 19, but probably not the primary on January 26. But regardless of the outcome in those two states, she must do well in the 21-state Super Tuesday primaries on February 5 to pull away from the freshman senator from , who was tied with her in the national Gallup Poll on the eve of the New Hampshire primary after being 18 points behind barely a month ago.

Clinton had been first undercut by a lousy campaign strategy and then by her own self in unconvincingly arguing that she has oodles of Washington experience but is an agent for change even though that experience has not included efforts to reform a system of governance that many Americans believe has betrayed them, let alone make a clean break from President Bush on the Iraq war. She now has to encourage scrutiny of Obama while not seeming like she is picking on him. This is a balancing act that she has thus far not mastered.

Meanwhile, Obama has to lobby hard for the endorsements of fellow senators and stay on message. The former will be more difficult than the latter, at least until Obama is able to rack up more victories. But it is his message where he remains most vulnerable.

New Hampshire voters appeared to be more interest in issues than personalities, and Obama has yet to put flesh on the bones of change, bipartisanship and coalition building -- the buzzwords that are integral to his message.

You can practically hear the knives being sharpened as the mainstream media gets around to noticing that. Clinton the Comeback Kid already has.


By contrast, John McCain's win over Mitt Romney in the Republican primary was hardly surprising unless you remember that this media favorite has been given up for dead several times.

Nevertheless, McCain's 37 to 32 percent point victory over the former Massachusetts governor, who has a vacation home in New Hampshire, sets him up for what could be the ultimate vindication – a showdown with Romney in the Michigan primary on January 16.

Romney was born and raised in and his father was a three-term governor. Losing to McCain would effectively spell the end of a campaign that had counted on early primary wins. This would free up the senator to go after Mike Huckabee, who finished a distant third yesterday with 11 percent of the vote in a state with few evangelicals, his greatest source of support and prehaps the only one of consequence.

Meanwhile, Rudy Giuliani finished with 7 percent thanks to a skip-the-early-states strategy that did not take into account that while he was busy hiding his skeletons the rest of the field was busy making headlines.

Almost twice as many New Hampshire residents voted in the Democratic primary, yet another sign that there Republican field is generating comparatively little enthusiasm. The GOP is indeed in big trouble this November.

A final note: For all of the catterwalling, including some by Yours Truly, that the nominating process was front loaded and unfairly favored a couple of small states, the system has more or less worked because the people have more or less spoken.

Onward through the fog!
Posted by Shaun Mullen at 2:30 AM
Email ThisBlogThis!Share to TwitterShare to FacebookShare to Pinterest