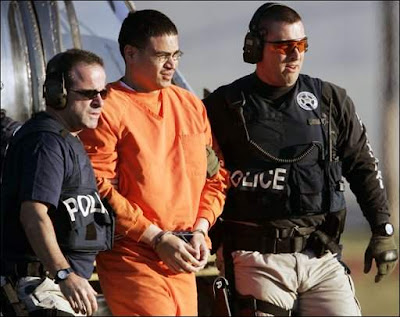 That remains the inescapable conclusion after the hapless Padilla was sentenced to 17 years in prison today after having been found guilty of the small handful of remaining charges that the government had not been embarrassed into dropping.

The government had initially boasted that the former gang member turned Muslim was the "Dirty Bomber" and intended to detonate a crude nuclear device in a major American city. But by the time Padilla went on trial last fall, there wasn’t a peep about the bomb plot because it would have opened the door to the administration's use of torture and other coercive interrogation techniques.

For me, Padilla has been the ultimate wake-up call to the true character of the Bush administration: Imprisoning a one of its own citizens on soil with no charges of any kind and then keeping him for years incommunicado, a line that I never though I would see crossed in my beloved America.

What is doubly sad is that the entire Padilla saga aroused so little controversy.

Posted by Shaun Mullen at 3:43 PM
Email ThisBlogThis!Share to TwitterShare to FacebookShare to Pinterest