There Is a God: Rudy Sinks Like a Stone 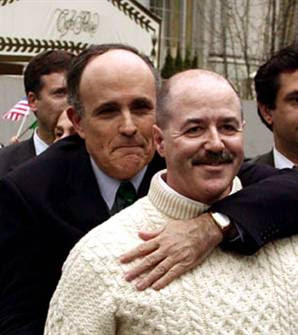 Has there been a lousier major presidential candidate in recent memory than Rudy Giuliani, an ethically challenged one trick pony whose campaign has pretty much self destructed before his "first big test" next week in the Florida primary?

I don’t think so, but am willing to take on challengers.

Giuliani's descent from Republican frontrunner status in national polls last fall to the point where Ron Paul has received nearly twice as many votes in the early primary contests, is a thing of beauty.

It's hard to imagine what America’s Mayor can say or do beyond the conservative flapdoodle that this former died-in-the-wool liberal has tried to perpetrate on voters to salvage even a decent showing in the Sunshine State, where he had expected to be the winner. He now badly trails John McCain and Mitt Romney and is a distant third with Mike Huckabee in one Florida poll and fourth behind McCain, Romney and Huckabee in another. He had been first in both polls in December.

What makes Giuliani's tumble even more breathtaking is that he has spent some 52 days campaigning in and dropped $3 million on advertising but is drawing smallish crowds many places and is now having to fend off questions about whether he will even stay in the race if he loses.

* His strategy of ignoring the early contests and instead concentrating on backfired badly as his opponents got plenty of face time as the media focus went from to to and most recently to . Now the media has saddled him with an "underdog" label and that will be all but impossible to shake between now and next Tuesday.

* He has said that the more people find out about his ideas the more support would accrue to him, but those ideas range from a crackpot foreign policy to a variety of views that reveal him to be out of his depth when it comes to national issues.

* His endless boasts of his post-9/11 attack prowess haven't given him an edge. Besides which, he is vulnerable to criticism that his administration failed to address flaws in the response to the first World Trade Center bombing in 1993 that remained on 9/11, and that he sent clean-up workers into harm's way after the Trade Center towers fell.

* His negatives are high because of a series of personal and professional scandals that make Bill Clinton seem like a pillar of probity by comparison. A presidential campaign should not be a popularity contest, but truth be told, Giuliani just isn't a very nice person.


* He has a severe money crunch and had to return to earlier this week for emergency fundraising. His senior aides have not been paid for some time. (McCain and Huckabee also are strapped, while Romney is drawing on his personal fortune.)

He joked that Romney had gone easy on him in asking a question about the economy and suggested that it reflected that his rivals no longer considered him a threat.

"When Mitt Romney asked me a question, he asked me a very nice question. I think I lulled him into a false sense of security," Giuliani said, adding later in the debate: "We're going to come from behind; we're going to win here in Florida."