Against The War Before They Were For It 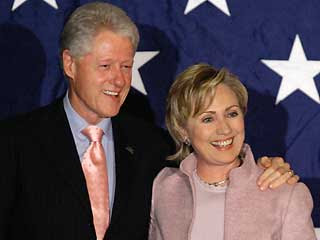 "What Ifs" proliferate in any discussion of how the war might have turned out differently, indeed whether there would have been a war at all.

At the head of my list is what would have happened had influential Democrats opposed the war. They didn’t, of course, and the rest was history.

This makes Bill Clinton's remarks that he doubts the sincerity of Barack Obama's opposition to the war so ridiculous since and wife Hillary never raised a peep by way of objection in the run-up to the invasion.

Richard Durbin, Obama's Democratic colleague from and second-ranking party leader in the Senate, tells The Politico that the former president needs to lay off:

"It was not easy to be against that war back when we cast that vote in October of 2002. I was one of 23 who voted against the war. Barack was supportive — one of the few candidates speaking out strongly against it in .

"If President Clinton had opposed that war as strongly as Barack Obama at the time, it would have helped a lot of us who had voted against authorizing an invasion."

For the record, I initially supported the war, albeit reluctantly, because I bought into the Bush administration's lies.

For Bill and Hillary Clinton to suggest that their support was anything but unequivocal is not just disingenuous. It smacks of a sort of desperation.

Posted by Shaun Mullen at 12:55 PM
Email ThisBlogThis!Share to TwitterShare to FacebookShare to Pinterest