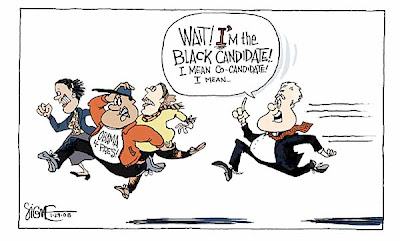 I had just been asked a question -- I don't remember which one -- and Obama was sitting right next to me. Then the moderator went across the room, I think to Chris Dodd, so I thought I was home free for a while. I wasn't going to listen to the next question. I was about to say something to Obama when the moderator turned to me and said, "So, Gov. Richardson, what do you think of that?" But I wasn't paying any attention! I was about to say, "Could you repeat the question? I wasn't listening." But I wasn't about to say I wasn't listening. I looked at Obama. I was just horrified. And Obama whispered, "Katrina. Katrina.' The question was on Katrina!" So I said, "On Katrina, my policy . . . " Obama could have just thrown me under the bus. So I said, "Obama, that was good of you to do that."

Putting Obama on the Kennedy axis effectively identifies him as radioactive to all but the most liberal of independents. It's akin to getting the Jimmy Carter endorsement, except that Carter has a better sense of personal ethics.

The attorneys said in a joint statement that they believed Obama was the best choice to roll back the Bush-Cheney administration's detention policies in the war on terrorism and thereby to "restore the rule of law, demonstrate our commitment to human rights, and repair our reputation in the world community." The attorneys are representing the detainees in habeas corpus lawsuits, which are efforts to get individual hearings before federal judges in order to challenge the basis for their indefinite imprisonment without trial.

Hillary Clinton, who has supported the war from the beginning, applauds the surge. Maybe this doesn't disqualify her from the Democratic nomination, but being consistently wrong on the most important issue of the Bush era has to create a presumption against your candidacy when you're running against two credible, electable progressive candidates. In the cheap pandering category, she uses claims that she will deport illegal aliens accused of crimes with "no legal process."

One year ago, the Iraqi government was supposed to meet 18 benchmarks, as measurements of progress. One year later, notwithstanding the military escalation, it has accomplished only three. As for Bush's reference to "de-Ba'athification reform" (allowing former Ba'athist party members to return to government work, as a sign of national reconciliation), he not surprisingly failed to mention certain salient facts. The law was passed on a day when the parliament barely achieved a quorum, meaning that less than a third of the members voted for it; and many former Ba'athists believe that the complicated language will wind up expelling even more of them from government. Just last week, a senior Iraqi official told Newsweek that the law was "a big mess, perhaps worse than if we had done nothing." And lastly, in his State of the Union speech one year ago, Bush declared, "Americans will hold the Iraqi government to the benchmarks it has announced." This year? Not a single word about holding the Iraqi government accountable.

Gov. Arnold Schwarzenegger's audacious plan to arrange medical insurance for nearly all Californians -- one watched as a potential model for the nation -- was rejected Monday by the state Senate, obliterating the chance of anything but piecemeal healthcare changes from the Legislature this year.

The military's African command cannot find an African nation willing to host it, and will stay in for the forseeable future. This story is flying under everyone's radar and yet I think it's one of the most clearcut examples yet of the damage the Bush presidency has done to on the world stage.