The Story of the George Bush Presidency: Unstable, Unfinished & Uncomprehending 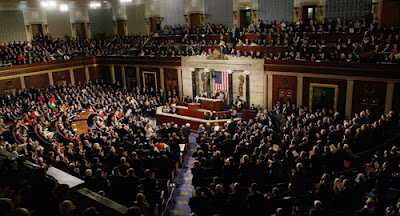 If you think his daddy had trouble with “the vision thing,” wait'll you meet this one.
-- Molly Ivins on President-Elect Bush

Hard to believe, but I still can muster a modicum of sympathy for George Walker Bush. This is because it is apparent after the last seven long years that this son of the Texas oil patch really didn't know what hit him, still doesn't know what hit him and still won't know what hit him when he heads home one year hence to his ranch to search among the scrub brush for his squandered legacy.

This is not to say he can be forgiven for his innumerable excesses, but that deer-in-the-headlights look we saw again last night as he give his final (Praise the Lord!) State of the Union speech was a reminder that seldom has a president been so utterly overmatched, and certainly no one comes close in modern times.

The speech, delivered on the eve of the Florida primary by a man whose hair seems to turn grayer by the day, was overshadowed by developments in the race to choose his successor, chief among them the official rollout of "Camelot 2008." But for those watching and listening, the speech could have been titled "Unstable, Unfinished and Uncomprehending."

Unstable as in the economy and his predictable solution of throwing money at Americans but not identifying, let alone addressing, the underlying institutional problems.

Unfinished as in the war and his predictable refusal to set a troop withdrawal timetable, which gives Prime Minister Al-Maliki even less incentive to build on the transitory successes of the Surge.

Uncomprehending as in his predictable cluelessness regarding the serial failures of his administration, including its abject divisivness, a central theme of the Democratic response delivered by Kansas Governor Kathleen Sebelius.

More here on the SOTU address.

Meanwhile, I'll leave you with a most damning bill of particulars -- excerpts from Bush's acceptance speech at the 2000 Republican National Convention. When one takes into consideration all that has happened — and should have happened but did not — since then the disconnect between image and reality is mind boggling:

"America's armed forces need better equipment, better training and better pay . . . A generation shaped by Vietnam must remember the lessons of Vietnam: When America uses force in the world, the cause must be just, the goal must be clear, and the victory must be overwhelming . . . I don't have enemies to fight. I have no stake in the bitter arguments of the last few years. I want to change the tone of to one of civility and respect . . . We're learning to protect the natural world around us. We will continue this progress, and we will not turn back ... to lead this nation to a responsibility era, that president himself must be responsible. So when I put my hand on the Bible, I will swear to uphold the laws of our land . . . I will not attack a part of this country because I want to lead the whole of it."

Photograph by Mark Wilson/Getty Images
Posted by Shaun Mullen at 6:20 AM
Email ThisBlogThis!Share to TwitterShare to FacebookShare to Pinterest