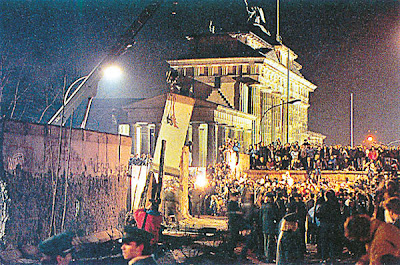 CIA learned of the Berlin Wall fall and Soviet Union collapse on CNN
Although it may not be the best metaphor, if the Central Intelligence Agency had been a baseball team during over the last 60 years, its record would be something like 5 wins and 95 loses in big games.

Yes, the CIA has been that bad.

That is abundantly clear – and made abundantly clear in shocking detail based on impressively exhaustive research – in Legacy of Ashes: The History of the CIA by Tim Weiner, who covered intelligence and security issues for The New York Times.

An agency with a mandate like the CIA by its very nature sometimes has to engage in illegal and immoral behavior for the greater good. That uncomfortable reality certainly is in play in the CIA torture tapes destruction scandal. But while the CIA did plenty of rotten things, Weiner's inescapable conclusion is that the agency has been extraordinarily incompetent in practically everything it has done since its creation in 1947 from the remnants of the comparatively praiseworthy Office of Strategic Services, and very seldom has been held accountable.

And saves plenty of blame for presidents and congressional overseers who have been bootlicked while they were fed a steady diet of lies and misinformation but made only half-hearted efforts to crack down, on let alone reform, the CIA.

As it is, the CIA is a considerably diminished agency both in size and mandate in its 60th year and that is not a bad thing considering how it has continuously compromised national security while failing to anticipate:

The strength of and support for the North Vietnamese and Viet Cong in the 1960s.

The 1979 ouster of the Shah, Iranian revolution and rise of the ayatollahs. The 1979 Soviet invasion of .

* The fall of the Berlin Wall in 1989 and subsequent collapse of the .

* The coming of Osama bin Laden, Al Qaeda and the global Islamic jihad in the mid-1990s.

* The 1998 explosion of a nuclear bomb by India, which remade the balance of power.

* That the pre-2003 invasion claims of Saddam Hussein that he had WMD were false.

Weiner notes that the CIA did have some successes: It accurately predicted the 1967 Six-Day War in the , waged a successful cyber warfare campaign against a Soviet espionage team in the mid-1980s and precipitated the exit of the Soviets from the rise of the Taliban).

The CIA's role in not anticipating the 9/11 catastrophe is especially outrageous and all the more so when CIA director George Tenet was awarded the Presidential Medal of Freedom.

This is because the CIA, as well as the FBI and NSA, had detailed intelligence that Al Qaeda was plotting an attack on the homeland. It knew the terrorists' modus operandi if not their exact targets and even the identities of some of the terrorists and their whereabouts in country but repeatedly failed to act when confronted with inconvenient intelligence that might force it to get off its bureaucratic ass

The last best chance to reform the CIA came in 1994 when Congress created a commission on the future of the agency.

Weiner writes that the commision was, a disaster from the start, something for which President Clinton and not just Congress must share the blame:

"[N]othing focused the commission. Not the March 1995 attack by a religious cult that poured sarin gas into the subways, killing 12 people and injuring 3,769, an event that signified the transformation of terrorism from nation-states to the self-anointed. Not the April 1995 bombing of the federal headquarters in , which killed 169 people, the deadliest attack on American territory since . Nor the discovery of a plot by Islamic militants to blow up a dozen American airliners over the Pacific and crash a hijacked jet into CIA headquarters. Not the warning from a CIA officer that someday the would face 'aerial terrorism' – an airplane dive-bombing a target. Not the fact that a total of three people in the American intelligence community had the linguistic ability to understand excited Muslims talking to each other. Not the realization that the ability of the CIA to analyze information was being drowned by the explosion of e-mail, personal computers, cellular telephones, and publicly available encryption for private communications. Not the growing realization that the CIA was in a state of collapse."

Weiner notes that the C.I.A.'s most vocal cheerleaders have long argued that its successes are secret and it would be exonerated if that was not the case, but he undercuts that argument through in-depth interviews with former CIA officials and a thorough examination of once classified agency archives.

I have reluctantly come to the conclusion that the CIA, which has been further enfeebled during the Bush years, should be abolished.

Weiner makes it clear that he did not write Legacy of Ashes to bury the CIA but in the hopes that it can be resurrected. Nevertheless, he concludes that:

"For sixty years tens of thousands of clandestine service officers have gathered only the barest threads of truly important intelligence -- and that is the CIA's deepest secret. Their mission is extraordinarily hard. But we Americans still do not understand the people and the political forces we seek to contain and control. The CIA has yet to become what its creators hoped it would be."

Posted by Shaun Mullen at 2:36 AM
Email ThisBlogThis!Share to TwitterShare to FacebookShare to Pinterest

Shaun,
I just read Legacy of Ashes and I concur with your synopsis.
My overarching thought as I laid the book down was this:
If the money and man power wasted/expended by the CIA since WWII had been directed into international USA humanitarian endeavors a la a Peace Corp, digging latrines and providing warmth, economic and agricultural expertise and shelter, literally millions of people would have not died in scores of fruitless vainglorious militaristic or quasi militaristic ventures.
Given that the CIA approach and its track record resulted in a net negative achievement quotient, simply being the good guys could not under any system of logic have had such deplorable results. Add to this that during these years our knowledge of other ethnicities and intelligence therefrom was pis poor. Had we been the good guys, here and there we would have been on the inside track and actually been have been exposed to local intel as a natural byproduct. We also would have represented an ideal and therefor a reason to elicit loyalty and intel.
My favorite part of the book was a comment that Jimmy Carters' mindset that the underlying ethics and modi operandii of the Soviets was inferior to man's higher aspirations worried the Soviet hierarchy. They could deal with the illegal tradecraft of a right wing bellicose opponent but a holistic appeal to man's 'godly' nature made them nervous.
My point exactly, then as now.

We have to learn from this. There is sameness in the recruiting with-out identifying the common traits of the recruited. I got the feeling...but no proof...that half-right wingers made up most of the incompetents, but were incompetent not because of stupidity or lack of education, but how they saw the world. There was little long term thinking with a couple of exceptions like John McCone who should be given sole credit for avoiding the worst results we could have had from the Cuban Missile Crisis. We are still recruiting from the same sources for somehow we think that those who like the derring do and are anxious to use force somehow best serve us. History shows otherwise.

I have also just completed this book and found the detail fascinating. The CIA's record has been appalling and the pandering to Presidential whims was a real eye opener.