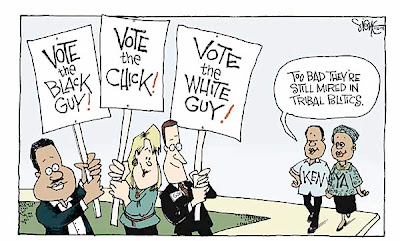 Does anybody want this nomination, or what? Can anybody broaden his base? The one-time national frontrunner, Rudy Giuliani, was so invisible in - yet another state he decided to skip - that he narrowly beat out Uncommitted, three percent to two percent. (If voting performance is indeed the main criteria for exclusion from a debate, maybe Rudy should be expelled from the next GOP slugfest.)

The Republicans can really thank Bush for this state of affairs. (Bush quote of the week, via ABC News: "I view myself as a peacemaker.") Even a passably popular lame-duck president can generally anoint a successor, but Bush's multiple failures have created a vacuum that nobody seems poised to fill. No wonder the candidates strain not to utter his name.

So we've reached the point where Huckabee's emergence into "serious contender" territory has officially stopped being entertaining to me, however amusingly much it might annoy certain conservative pundits who pandered to the Christian right when it suited their perception of their interests to do so.

A man who can look voters, the media, and the Chicken Littles in Congress in the eye and say the three words no one wants to hear in : Suck. It. Up.

Some lessons take a while to fully sink into the consciousness, and apparently the lesson of 2006 still hasn't quite finished doing so. Republican as well as Democratic appropriators have flooded the White House with demands that he drop the idea of issuing an executive order to defund the non-legislative earmarks in the omnibus spending bill. Democrats warn of year-long war with the Bush administration, while Republicans complain that they need pork to win elections.

In an unusual public criticism, Defense Secretary Robert M. Gates said he believes NATO forces currently deployed in southern do not know how to combat a guerrilla insurgency, a deficiency that could be contributing to the rising violence in the fight against the Taliban.

A former congressman and delegate to the United Nations was indicted Wednesday as part of a terrorist fundraising ring that allegedly sent more than $130,000 to an al-Qaida and Taliban supporter who has threatened U.S. and international troops in Afghanistan.

The former Republican congressman from , Mark Deli Siljander, was charged with money laundering, conspiracy and obstructing justice for allegedly lying about lobbying senators on behalf of an Islamic charity that authorities said was secretly sending funds to terrorists.

What exactly is it about influential conservatives and radical Islam? They hate it of course, except when they don’t. Granted that George Herbert Walker's kid "Bandar" Bush has no problem kissing up to the most repressive, religiously totalitarian leaders in the Muslim world, but he’s just looking after the family business. Others like Grover Norquist have the kind of longstanding, deeply personal stake in radical Islam that would provoke Goldbergian books of drooling outrage if done by a prominent leftist with similarly pervasive influence in ideology and in the government. Rudy Giuliani, mister git-the-islamofascist-Muslims himself, has no problem lobbying for a Yemeni shiekh who helped slip 9/11 suspects out of the country.

Then you have the Sibel Edmonds allegations. Color me skeptical, but if true, yikes.

Let us start with a simple truism: There is not now, nor has there ever been, any such thing as “isolationism” in the history of American foreign policy.

In the lexicon of Wilsonian internationalists and neoconservative interventionists, isolationism was a ghastly policy from the prehistoric era of American politics. Isolationists, they warn, wished to quarantine from trade and diplomatic relations with the outside world. If isolationists had their way, America would look like a scene from "Deliverance," a land of strange, hump-backed mountain people with dragging knuckles and odd numbers of chromosomes.

This is, of course, utter nonsense. This version of "isolationism" is a self-serving fabrication invented by interventionists to make minding our own business sound like an evil idea.