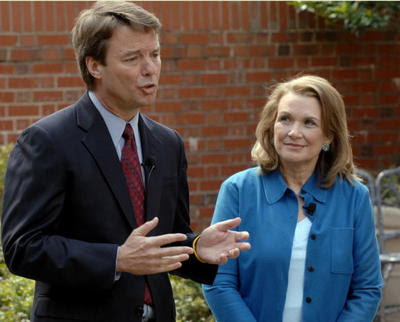 [John Edwards] clearly was the wrong man with right message for the right time. The right message was the haywire economy and the ridiculous gap between the rich and poor in . But he was the wrong guy both because of a) who he opposed, with Democrats swept up in the tidal wave of emotions and possible history of electing a president who, well, doesn't look like John Edwards, and b) Edwards himself, who gave the right-wing spin machine and a hostile media way too much peripheral ammo, from the big house to the hedge fund to, yes, charging a fancy haircut to his campaign.

A beautiful, gracious [withdrawal] speech. It was deeply fitting, and for me, affecting, for Edwards' final address as a presidential candidate and national politician to focus on the One America, the more decent, more just America that we believe in, and that he's fought to build. Watching him on that stage, there was no artifice to his claim that he's now forced the other candidates to embrace his passions and adopt his causes. Whatever their assurances to him on the phone, John Edwards set the terms of this race, and the contours of their agendas, many months ago.

If Dems are planning to start crafting campaign narratives surrounding John McCain, I might recommend an obvious one: the senator appears to have temperament issues.

McCain has a lot more in common with TR and Bill Kristol than Ronald Reagan. And that's damned scary. Why? If the Bush era has taught us nothing else, it is that we must be skeptical of interventionist foreign policies whether grounded in the national greatness "conservatism" of a Teddy Roosevelt or the neo-"conservatism" of a Bill Kristol. It produced a foreign policy quagmire that eviscerated any opportunity to advance the conservative agenda at home . . . Importantly when it comes to McCain, his interventionism is fundamentally contrary to the traditions of mainstream conservatism. We can complain about various McCain positions, like McCain-Feingold, but in a sense those are tactical issues. Here is where, in my opinion, McCain fundamentally goes off the reservation.

McCain beats Romney handily, Giuliani is set to endorse McCain tomorrow, the Terminator is praising McCain and Nancy Reagan is gonna lend the mantle of Saint Ronnie to McCain, and Romney has been such an utter douchebag with his big money attack ads and phalanx of bootlicking supporters that Huckabee is going to stay in the race just to screw Romney. And if anyone deserves a right and proper screwing, it is that smarmy SOB Multiple Choice Mitt.

Maybe we should be less concerned with a Hugh Hewitt Suicide Watch and focussed on a John Cole Schadenfreude Watch.

The country could really do a lot worse than a McCain/Obama or McCain/Clinton match-up in November. No, the Republican race is not over, and Romney could still win, but I am going to watch the establishment freak out and I am going to love it.

Apparently saying change a lot wins the cigar although the notion that McCain represents change in any discernible direction other than a less hysterical approach to immigration seems unsupported. I've seen him making out with George and talking up the forever war too often. Obama was my choice, which figures, since anyone I vote for usually loses, but don't ask me why. I actually didn't decide until I was in the booth. OK, so I thought he represented change although I still don't know why or what or how he would change anything.

Careful. If you blink, you might miss another GOP congressman announcing plans to retire.

Yesterday it was Reps. Ron Lewis (R-KY) and Kenny Hulshof (R-MO). (Hulshof is not retiring per se, but running for governor.)

Today, it's Rep. Tom Davis (R-VA), who is expected to announce this afternoon that he is not running for re-election.

' departure brings to 28 the number of GOP retirements in advance of this year's election.

The news that over a million homes went into foreclosure in the in 2007, affecting about 1 per cent of all households or around 3 million people, supports the view that foreclosure has taken over from bankruptcy as the primary mode of financial catastrophe.