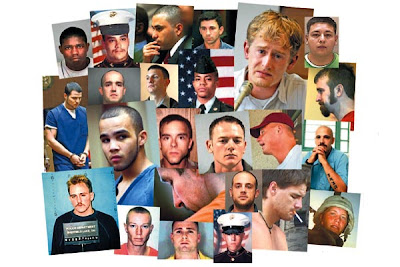 Individually, these are stories of local crimes, gut-wrenching postscripts to the war for the military men, their victims and their communities. Taken together, they paint the patchwork picture of a quiet phenomenon, tracing a cross-country trail of death and heartbreak.

The New York Times found 121 cases in which veterans of and committed a killing in this country, or were charged with one, after their return from war. In many of those cases, combat trauma and the stress of deployment — along with alcohol abuse, family discord and other attendant problems — appear to have set the stage for a tragedy that was part destruction, part self-destruction.

Three-quarters of these veterans were still in the military at the time of the killing. More than half the killings involved guns, and the rest were stabbings, beatings, strangulations and bathtub drownings. Twenty-five offenders faced murder, manslaughter or homicide charges for fatal car crashes resulting from drunken, reckless or suicidal driving.

As we reach for change in American leadership, [George] Bush's tears evoke sadness that his capacity to grieve for that Marine and his family as well as Holocaust victims never led him to join the majority of those he serves who want to put an end to killing as the means of choice to make the world safer.

Now we know that Hillary Clinton can cry over herself, but will she or whoever else succeeds George Bush be truly committed to sparing American families tears in the years ahead?

So the big political news is that the Iraqi parliament . . . finally passed a revision of the "De-baathification" law issued by US viceroy Paul "Jerry" Bremer in May of 2003. That law got tens of thousands of Sunni Arabs fired from their government jobs and excluded from public life and helped kick off the Sunni-Shiite civil war we having been living through for the past few years.

The passage of the new law will be hailed by the War party as a major achievement. But as usual they will misread what really happened.

If the new law was good for ex-Baathists, then the ex-Baathists in parliament will have voted for it and praised it, right? And likely the Sadrists (hard line anti-Baath Shiites) and Kurds would be a little upset.

Instead, parliament's version of this law was spearheaded by Sadrists, and the ex-Baathists in parliament criticized it.

Plenty of presidential candidates in both parties have talked about how they plan to chase al-Qaeda to the gates of Hell, apparently placing that squarely in Pakistan. Pervez Musharraf, who runs the joint, has an answer for those who propose sending American troops into Pakistan -- fuggedaboutit.

I don't know about you but I have had it with the legions of hustlers, grifters, drunks, junkies, pathics and drooling layabouts that keep waddling and teetering up to the public trough from that swamp of puke called . The latest of an endless line of calls upon the kindness of strangers by these public-purse pimps is this little bit of chicanery: Katrina victim sues for $3 quadrillion.

Having cut services, reduced routes and crammed planes full, and having steadily eroded benefits associated with frequent-flier programs, airlines may have alienated their best customers.

Let's start with the fiction that Americans are pro-life. They aren't. Pro-birth, certainly. But once you're born all bets are off. From a third world infant mortality rate to trying to use the death penalty against juveniles and the mentally impaired, to showing up last on the list for preventable deaths among nations that have health care, quality of life issues are reserved for the haves and the have mores. The have nots can work until they die and they should be grateful that their betters let them contribute.

Our economy is robust and healthy. That's a good one.

That Fox News is fair and balanced. As long as you stick with the party line of neoconservatism, otherwise you will be disappeared.

That the crew without a clue care for the world and its denizens more than they care for money and profit.

That Bush and aren't trying to start World War III. Again. The only thing that Bush has read carefully was My Pet Goat and we all know how well that turned out.

That global warming doesn't exist and that all our weather patterns are normal.

That freedom of speech still exists in this country and that business owners can determine appropriate behavior on their own property.

That drugs are designed to help you prevent the natural consequences of aging and that the side effects are worth it since walking, weight training and a good diet aren't enough. Or even more helpful, eliminating the drinking of sodas in childhood. For all kinds of reasons.