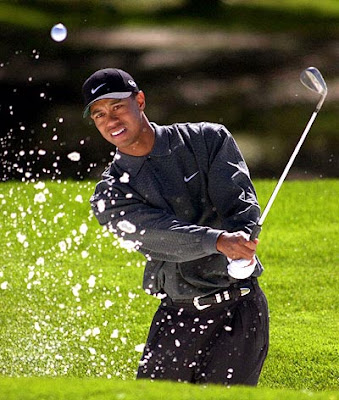 If money motivates, then the prospect of winning the top prize should bring out extreme effort in golf. But when Tiger is playing and you're not Tiger, you face a depressed prize schedule. If you assume Tiger is going to win, then the top prize available to you is $864,000 rather than $1.44 million. That beats the heck out of steak knives, but it's significantly less than the winner's take. Second place—among players who are not Tiger—gets $544,000 rather than $864,000, and so on. While Tiger certainly doesn't win every tournament he enters, he does frequently shift the reward schedule for most of the field. Of the 219 tournaments he's played in during his first professional decade, Tiger collected 54 PGA wins, finished in the top three in 92, and in the top 10 in 132.

Ah, just a measley $4.5 million in start-up money yields more than $100 million in two years. Who says blog networks have to lose money?

A joint report by the Center for Strategic and International Studies and the US Institute for Peace has also revealed that has "contingency plans" in the event of 's implosion. The report, entitled 'Keeping an Eye on an Unruly Neighbor', said that China was prepared to "take the initiative" and had a military strategy for securing North Korea's "loose nukes" should Kim Jong-Il's rule fail.

Any apocalyptic scenario has to be taken with a grain of salt; in 1997 the Central Intelligence Agency predicted the collapse of within five years. However, there are reasons for the heightened levels of concern; in particular, the recent actions of Kim Jong-Il and other North Korean officials are being interpreted as signs that the regime is nearing its end.

[Bill] Gates just gave a speech advocating a kindler, gentler capitalism, posing a good brother to the poor. At the same time, Microsoft is embarking on the most far reaching monitoring of workers ever contrived in which wireless sensors could read “heart rate, galvanic skin response, EMG, brain signals, respiration rate, body temperature, movement facial movements, facial expressions and blood pressure”, the application states. The system could also “automatically detect frustration or stress in the user” and "offer and provide assistance accordingly."

I understand that the GOP base doesn’t give a crap about global warming, For that matter, I'm not sure I give a crap about it (except as it might affect the wine industry). I also understand that the GOP base doesn’t want to turn the economy over to Al Gore. I certainly don’t wany Gore or his ilk setting economic policy! Having said all that, however, I am certain that the position of the GOP's leadership and the base on the environment is one of the main problems the Republican brand is having both globally and domestically. Plus, of course, conserving the environment is something conservatives ought to care about. Indeed, being good stewards of creation is sound theology.

-- PROFESSOR BAINBRIDGE
We all know the Times' Republican endorsement is a sideshow. What really counts is the editorial board’s endorsement of Hillary Clinton.

Oh yeah, that $600 dollar rebate is really going to help the economy. Not. What kind of idiot do you have to be to believe that $600 is going to help people who have lost their homes, their children are living with friends who still have a home and the parents are living in separate shelters? That would be Bush and his enablers, the Dumocrats. If he made a sharp left turn, most of them would break their neck since it's so far up his ass.