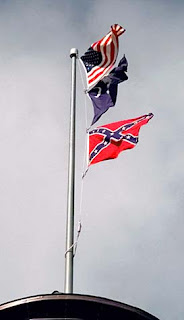 I will begin this post by noting that I am not qualified to write about the quadrennial controversy regarding a Confederate battle flag flying over the statehouse.

This is because even though I was born and bred in a border state () my sympathies, which have only deepened over the years, lie with the .

And that I still don't understand the Viagra-like kick that some South Carolinians and certain other people of the white Southern persuasion get over seeing a Confederate flag flying in town squares, over football stadiums, on many a pickup truck rear window and at the occasional pig roast.

While it took a suspension of belief for me to come around to the view that displaying a Confederate flag is not necessarily endorsing slavery and the other less savory aspects of the Old South, which was helped along nicely by reading Tony Horwitz's marvelous Confederates in the Attic, I now have a more nuanced view of a controversy that is again a tiresome staple of campaigning for tomorrow's South Carolina Republican primary.

But nevertheless am offended that my main Republican man, John McCain, is being dogged by protesters waving Confederate flags in his face when he's out on the stump because they are (still) in a lather over his brave call after the 2000 primary to remove the Confederate flag from the top of said statehouse.

McCain, who seems to get hung up on that principle thing more than most of his GOP presidential wannabe peers, does not pretend that the flag issue hasn't been damaging to him:

"Probably the worst piece of advice I've ever given to myself . . . And I decided that I would say it's not an issue I should be involved in, that it should be decided by the people of the state of South Carolina. I knew it was a symbol that was offensive to so many people. And afterwards, I went back and apologized. But it was needless to say, by saying that I wouldn't have anything to do with an issue like that was an act of cowardice."

An earlier version of this post had an incorrect reference to the kind of Confederate flag flying over the South Carolina statehouse. This prompted the following email:

As a Southern boy, I disagree with you about flags, but that is pinion, and we could go 'round and 'round on that. But you are incorrect in a matter of fact. Your refer to the Stars and
Bars, and show a picture of the Confederate Battle flag.

This is the Stars and Bars: http://www.usflags.com/images/products/starsbar.jpg

This is the battle flag: http://www.usflags.com/images/products/confed.jpg

Maybe if we want to use a historical flag that will fly under the radar, we should use the Bonnie Blue:
http://www.usflags.com/images/products/Product-1008.gif