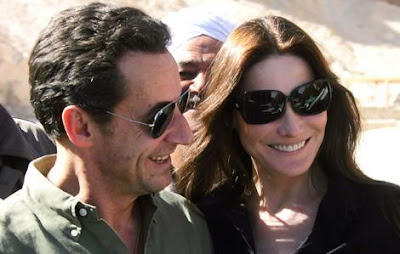 A few years ago, I was quite pleased that no one in seemed too bothered that our married but separated prime minister Bertie Aherne lived with his mistress/girlfriend/partner and even brought her on foreign trips. Bertie hasn't given me a lot of joy overall, but it was nice to think that the Irish public had better things to do than worry about his marital status. . . .

My idea of our newfound sophistication was punctured by a couple of diplomats. The French were particularly annoyed as they felt everyone should understand the mistress's carefully delineated position. It was just gauche, they thought, to bring one's mistress to an official dinner and expect other people's wives to sit down beside her. Soon enough, Bertie dumped poor Celia – and the press did take a great interest in that – and began to go to official functions by himself.

But now the French are hoisted on their own petard! Sarkozy’s man-eating girlfriend, who happens to be the spit of his recent ex-wife, might accompany him on a state visit to next week. And because the Indians are particularly conservative when it comes to recognising non-marital relations, they don’t know where to seat Ms. Bruni for dinner or where she should sleep. It really is a bit rude to put your hosts in such a quandary. So much for Sarko being anything but gauche.

It's amazing the degree to which the actual mechanics of winning the primary contests are ignored in favor of how various outcomes impact press narratives that the press is somehow powerless to control.

Central to the critique is the claim that Obama's message flies in the face of history, that partisanship is, as one critic put it, "the natural condition of politics." . . . While you can certainly marshal evidence to support this interpretation, very few of the so-called founding fathers (save perhaps Aaron Burr) would agree with it. And the first four presidents — George Washington, John Adams, Thomas Jefferson and James Madison — would regard it as a perversion of all that they wished the American republic to become.

There are a few moments where pure schadenfreude can honestly be enjoyed without guilt. Besides Geraldo getting assaulted by neo-Nazis he wanted to exploit for ratings, the second-best example is watching Democrats beat each other up by accusing each other of the voter fraud they insist doesn't exist in general elections.

A friend of mine was introducing me to someone today, and for some reason he felt the need to tell her that I blog. "He has a blog called Field Negro. I think he is the last angry black man left in ." Ha ha ha ha, laughs all around.

Of course dude was right. At times it seems that there are no angry black men left in A-merry-ca. I think the angry black man has been ashamed into accepting his fate, and his place in the A-merry-can scheme of things. But there is nothing to be ashamed of. Not when your anger is driven by disappointment and not resentment.

Some 3 billion fortune cookies are made each year, almost all in the United States. But the crisp cookies wrapped around enigmatic sayings have spread around the world. They are served in Chinese restaurants in Britain, Mexico, Italy, France and elsewhere. In India, they taste more like butter cookies. A surprisingly high number of winning tickets in Brazil's national lottery in 2004 were traced to lucky numbers from fortune cookies distributed by a Chinese restaurant chain called Chinatown.

But there is one place where fortune cookies are conspicuously absent: China.

Now a researcher in Japan believes she can explain the disconnect, which has long perplexed American tourists in China. Fortune cookies, Yasuko Nakamachi says, are almost certainly originally from Japan.