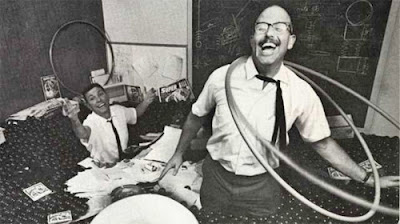 Knerr (foreground) and Melin with fruits of their labors

Other than that wee birthmark next to my left eye, I can honestly say the only thing that has scarred me for life is my inability as a youngster to master the Hula Hoop.

That is why while the world mourns the passing of Richard Knerr, co-founder of Wham-O Inc., who unleashed that great late 1950s fad, I'm silently gloating.

With his boyhood best friend, Arthur "Spud" Melin, Knerr started their fad factory in 1948 in . They named the enterprise Wham-O for the sound that their first product, a slingshot, made when it hit its target.

The Hula Hoop was created after a friend told the pair about a bamboo ring used for exercise in and they devised their own version without ever seeing the original.

Wham-O soon was producing 20,000 hoops a day at plants in several countries, while other companies made knockoffs. Within four months, 25 million of the hoops had been sold.

That success notwithstanding, the fad also provided a sobering business lesson. Wrote Richard A. Johnson in the 1985 book American Fads:


"In April of 1958, people were standing around the block at department stores that were waiting to get their shipment. By September, you couldn't give them away. Once every household had two or three, it was over because they lasted forever."

It is a fitting epitaph to Knerr's imagination that Silly String has found new life as American soldiers in Iraq use it to detect nearly invisible trip lines wiresd to deadly explosives left by insurgents.

More here on the life and times of Richard Kneer.

I always wondered what he thought of the Hudsucker Proxy's version of the hula hoop and Frisbee histories.