A Sad Commentary On These Times 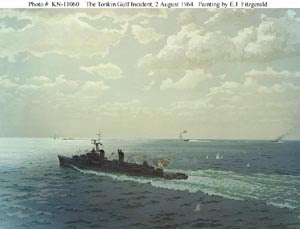 It is a sad commentary on the times in which we live that my initial reaction to a Pentagon report that Iranian fast boats had swarmed warships in the on Sunday was disbelief. And that the incident was being used as a pretext to up the saber rattling .

The Irani government downplayed the report, of course, and says that a video of the incident is a fake. I dunno. But I do know that after being lied to by my government with mind numbing regularity, it just isn't possible to cast the U.S. as the good guy in this one.

The incident, of course, brings to mind the notorious Gulf of Tonkin Incident, a non-event that the Johnson administration used as a pretext for escalating U.S. involvement in the Vietnam War.

The so-called precipitating incident on August 4, 1964 actually occurred two days before the fabricated incident when North Vietnamese gunboats engaged the destroyer USS Maddox (see painting) in the South China Sea following covert U.S. attacks on North Vietnam. The U.S. used radio transmissions from the August 2 incident to argue that on August 4 the Maddox and destroyer USS Turner Joy were the targets of unprovoked attacks.

What is now certain is that on August 2 the Maddox fired on the gunboats first, the attack on the Turner Joy never occurred and a sonar technician who reported the firing of 22 North Vietnamese torpedoes confused them with the sound of the engine of his own ship.

How ironic that President Bush arrived in the Middle East this week not to engage in diplomacy with the country that can shut down the Strait of Hormuz, which is so crucial to world oil shipping, and restart its shuttered nuclear weapons program on a whim, but to rally opposition to it.

Cernig nails it at Newshoggers, writing that:

"We're back to 'bomb, bomb, bomb Iran' because five 'pimped out Boston Whalers' -- as Jules Crittenden puts it -- got close to an Aegis cruiser, a mini-Aegis Arleigh Burke destroyer and a frigate with a combined firepower that could probably sink the entire Iranian Navy and down the entire Iranian Air Force. Now that really is absurd."

Did I say what a sad commentary this is on the times in which we live?

Perhaps the ships should have just waited to see if one of those fastboats was a suicide craft.

If one of them had crashed into a ship and blown up, at least we would be sure that shooting at them was justified.

Good point, but it doesn't change mine.

You should look at this conversation. The consensus on the site is that this was just another Tonkin, but scan down for "Jack", who is a Ron Paul supporter who spent 20 years in the Gulf. He very convincingly demolishes the conspiracy theory.

The other side of the coin here is that The Gulf of Tonkin incident was not a fabrication. It was a misunderstanding born of tension. After Johnson had already committed himself, he began to get suspicious and accused the Navy of shooting at fishes. It was, near as I can tell, a hysterical overreaction to a single torpedo launched at some distance, possibly unrelated to the Maddox. The crew spent the whole night shooting off their weapons at phantom targets. Admiral Stockdale who was flying above confirms that viewpoint. Johnson never knew for sure and nobody backed down from their original assessment. Even McNamara never knew what happened. He made a point of asking General Giap in 1995 what really happened. Giap said "Absolutely nothing."

The important thing to remember is that people can be wrong and still be telling the truth.