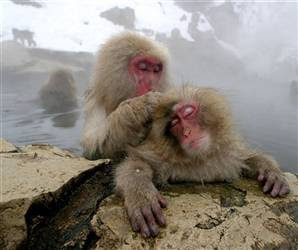 Male macaque monkeys pay for sex by grooming females, according to a recent study that suggests the primates may treat sex as a commodity.

"In primate societies, grooming is the underlying fabric of it all," Dr. Michael Gumert, a primatologist at the in , said in a telephone interview.

"It's a sign of friendship and family, and it's also something that can be exchanged for sexual services," Gumert said.

Gumert's findings, reported in New Scientist last week, resulted from a 20-month observation of about 50 long-tailed macaques in a reserve in Central Kalimantan, Indonesia.

Gumert found after a male grooms a female, the likelihood that she will engage in sexual activity with the male was about three times more than if the grooming had not occurred.

And as with other commodities, the value of sex is affected by supply and demand factors: A male would spend more time grooming a female if there were fewer females in the vicinity.

"And when the female supply is higher, the male spends less time on grooming ... The mating actually becomes cheaper depending on the market," Gumert said.

The newly appointed leader of the Taliban in Pakistan is being called more dangerous than Osama bin Laden by analysts there. His movement was created last month when 26 Pakistani militant groups joined forces to fight for an Islamic regime there, tribal sources say.

Baitullah Meshud, also known as the emir of South Waziristan, is described by Pakistani authorities as a brutal but able leader who commands thousands of followers. Pakistani President Pervez Musharraf blames him for the assassination of former Prime Minister Benazir Bhutto, as well as a spate of recent attacks here that have left more than 400 dead. NATO authorities in Afghanistan have offered a $50,000 reward for his capture.

"I think he is now a much bigger threat than bin Laden and al Zawahri in this part of the world," said ABC News consultant Rahimullah Yusufzai.

In the year since President Bush announced he was changing course in with a troop "surge" and a new strategy, military and diplomatic officials have begun their own quiet policy shift. After countless unsuccessful efforts to push Iraqis toward various political, economic and security goals, they have decided to let the Iraqis figure some things out themselves.

What I object to is the notion that the perspective of gender or race trumps that of economic class in considering the traumas of this nation. That is because the Bush administration is engaged in class warfare for the rich with a vengeance that has left many Americans hurting, and we desperately need change to reverse that destructive course.

What we need far more than a change in appearance is one of perspective. Otherwise, Condoleezza Rice would make the ideal candidate.

The battle is on between the owners of recreational ATVs and conservationists over who and what has the right to use our national forests and wilderness areas.

The natural contours of a landscape and indigenous flora and fauna are no impediments to piston-powered two-, three- and four-wheeled machines that are designed to go just about anywhere. A pristine dune or purling stream can be obliterated in a trice. Even in my domesticated village, public green space is regularly (and illegally) befouled by the idiotic offspring of internal combustion.

Of course, off-road vehicles are just part of the problem. An even bigger menace is road vehicles.

Scrape it flat. Pump tar out of the ground and spread it out on the surface. Another road. Another parking lot. Sometimes it seems as if our ideal planet would be as round and smooth as a bowling ball, asphalt black, painted with regular white lines.

We are hellbent on destroying the uniqueness of places.

album sales plunged 15% last year from 2006, as the recording industry marked another weak year of sales despite a 45% surge in the sale of digital tracks.

A total of 500.5 million albums were purchased as CDs, cassettes, LPs and other formats last year, down from 588 million in 2006, said Nielsen SoundScan, which tracks point-of-purchase sales.

The shortfall in album sales drops to 9.5% when sales of digital singles are counted as 10-track equivalent albums. The number of digital tracks sold jumped 45% to 844.2 million; digital album sales accounted for 10% of total album purchases.

For the first time since SoundScan started tracking genre sales, all 12 genres dropped, with rap down 30% and country more than 16%. Overall music purchases, including albums, singles, digital tracks and music videos, rose to 1.35 billion units, up 14% from 2006.

[T]he relationship between fan-written Web sites and the copyright owners of the content they draw on, if legally murky, has at least been peaceful. Once it dawned on media companies that fan sites are the kind of marketing that they usually pay hard cash for, they generally left the fans alone. But things turned sour in the fall, when the Harry Potter Lexicon Web site announced plans to publish a book version of its fan-written guide to the Potter world. Author J.K. Rowling and publisher Warner Brothers have sued the Lexicon for copyright infringement, exposing the big unanswered question: Are fan guides actually illegal?

As sympathetic as I am to Rowling and her rights as an author, the answer is no. There is a necessary and healthy line between what the initial author owns and what follow-on, or "secondary," authors get to do, and Rowling is running over that line like the Hogwarts Express. The creators of H.P. Lexicon may not be as creative as Rowling, but they are authors, too, and deserve a little respect from the law.

Posted by Shaun Mullen at 1:59 AM
Email ThisBlogThis!Share to TwitterShare to FacebookShare to Pinterest