So Many Friedman Units, So Little Time & Other News From Bush's Forever War 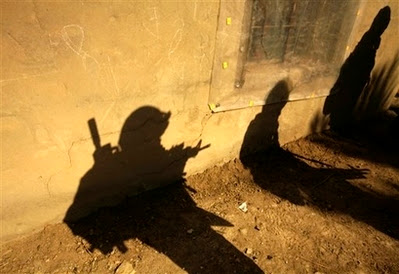 It seemed like only yesterday that General David Petraeus wowed the chuckleheads on Capitol Hill with his progress report on George Bush's Forever War. Well, it actually was September, at which time the commander of forces in said that any decision on beginning to withdraw his troops should "be put off for six months."

I know this is going to shock – just shock – you, but Petraeus now says the needs at least one more Friedman Unit, pretty please:

"We think we won't know that we've reached a turning point until we're six months past it. We have repeatedly said that there is no lights at the end of the tunnel that we're seeing. We're certainly not dancing in the end zone or anything like that."

If you find yourself feeling whipsawed at this point, you're not alone because much of the Republican establishment and a goodly number of Democrats are dancing in the end zone. And expect the commander in chief to do a jig during his State of the Union address next week.

The reality is 6,000 miles due east of Washington. Except for thankfully lower U.S. and Iraqi civilian death tolls because of the initial success of Petraeus' Surge strategy, there has been no progress whatsoever toward reconciliation, a prerequisite for troop withdrawals and the ultimate test of whether the Surge is a lasting success.

The recent passage of the un-de-Baathification law was hailed by some Iraqis as a sign of progress, but the law is a bad joke and not even the Bush administration is embracing it. Then there is Mosul, Iraq's third-largest city, where insurgents blew up a massive weapons cache in a vacant apartment building yesterday as an Iraqi army unit arrived to investigate it. At least 150 Iraqis are dead or wounded.

It is a tribute to the Bush administration's inability to level with the American people that a study has now been published that catalogues 935 false statements in speeches, briefings, interviews and other venues over a two-year period regarding the war, including at least 532 unequivocal statements that Iraq had weapons of mass destruction or was trying to produce or obtain them, or had links to al-Qaeda or both.

I don't think anyone really expected the presidential candidates to bring any clarity to what passes for a debate on the war, but what discussion there has been has ranged from the sublime to the ridiculous.

Anthony Cordsman, a military specialist at the Center for Strategic and International Studies who regularly visits , put it this way in The New York Times:"You have to grade all the candidates between a D-minus and an F-plus.

"The Republicans are talking about this as if we have won and as if is the center of the war on terrorism, rather than and and a host of movements in 50 other countries.

The Democrats talk about this as if the only problem is to withdraw and the difference is over how quickly to do it."

Funding for operations in and and other activities in the war on terrorism expanded significantly in 2007, the Congressional Budget Office said in a report released yesterday.

"It keeps going up, up and away.

"We're seeing the war costs continue to spiral upward. It is the additional troops plus additional costs per troop plus the over-reliance on private contractors, which also explodes the costs."

Since the 9/11 attacks, Congress has written checks totalling $691 billion to pay for the wars and related activities. That works out to about $11 billion a month.

Photograph by Maya Alleruzzo/The Associated Press
Posted by Shaun Mullen at 5:17 AM
Email ThisBlogThis!Share to TwitterShare to FacebookShare to Pinterest