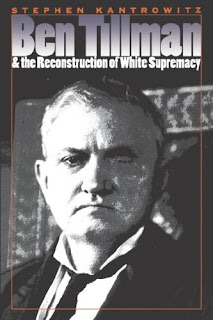 The political mantra this year is "change." But South Carolina, where the Confederate flag still flies on the grounds of the State Capitol, is a disturbing example of how difficult it is for people of good will to dispose of the toxic layers of bigotry that have accumulated over several long centuries . . . .

They still honor Benjamin Tillman down here, which is very much like honoring a malignant tumor. A statue of Tillman, who was known as Pitchfork Ben, is on prominent display outside the statehouse.

The rural schools in South Carolina are symptoms of a much wider problem. Only about 50 percent of the state’s children graduate from high school.

There has been a spasm of political campaigning here, but that will soon end. In presidential elections, South Carolina is reliably Republican. A state with Pitchfork Ben standing guard at the Capitol hardly could be otherwise.

The Democrats are here this week fighting over the black vote. It's ironic that in a state so racially polarized, there is so little serious discussion among the candidates of the race issue.

Senator Barack Obama, with his message of unity and healing (and not wanting to be seen solely as a black candidate), has tried to avoid addressing the issue of race head-on. Bill and Hillary Clinton have worked hard at turning that posture into a negative, aggressively courting the black vote, while at the same time spotlighting (directly and through surrogates) the fact that Mr. Obama is black.

The result has been a churning of the issue of race to no constructive effect . . .

Barack Obama's prospects of beating Hillary Clinton to the Democratic presidential nomination received a boost yesterday after 72% of white Americans told a CNN poll they believed the was ready to have a black president.

The poll will make glum reading for Obama's rival for the nomination, Hillary Clinton, however: fewer than two-thirds of respondents thought the country was ready for a female commander-in-chief.

The CNN/Opinion Research Corp poll, which was published on Martin Luther King day, found notably fewer black Americans (61%) than white believed the was ready for a leader who shared their skin colour.

Like most other trends, Australians tend to cycle through targets for their racist venom; the Irish copped it early before we moved onto the Chinese, then the Greeks and Italians, jumping back on the Vietnamese, until we settled on Arabs (in particular Lebanese) as the repositories of all that is lacking in human nature.

At certain points in history, you could mock any one of these racial groups in public and get a chorus of knowing "you're telling me" or "f---en oath" when describing that nationalities "obvious" lack of intelligence, hygiene or morality.

The exception is Indigenous Australians who, for as long as we've had Antipodean sand between our toes, have been held to be inferior by a large percentage of the 'white' population and who you can still ridicule to rousing support in most Aussie pubs.

As I've mentioned in other posts, verbally bashing Arab Australians has become a free-kick for racists, particularly in , but it seems even their position as the favoured piñata for narrow-minded bigots is being assailed.

South African Jews, once a rarity in our suburbs, have become an increasingly popular target for Aussie racists, so much so that you can make degrading pronouncements about them with little recourse.

Posted by Shaun Mullen at 4:25 AM
Email ThisBlogThis!Share to TwitterShare to FacebookShare to Pinterest