A Big Bowl of Symbolism Just Won't Do It 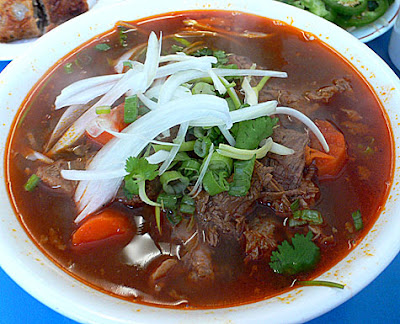 I was all fired up to write a deep-thinking post on Barack Obama's continuing indifference (or inability) to put meat on the bones of his otherwise captivating hope-and-change mantra after Daniel Larison cited this terrific quote from Joshua Foa Dienstag, an deep thinker whose specialty is the study of pessimism, which certainly would seem to be a growth industry in America:

"Since, unlike the present, tomorrow is always imaginary, such idolatry can be manipulated in many ways. On the one hand, of course, the Stalins of the world can demand the death of millions in the name of a future paradise. This is an especial concern of Camus, who complains of those who 'glorify a future state of happiness, about which no one knows anything, so that the future authorizes every kind of humbug. . . . '

Given the ironic character of history, we should, at the very least, make sure that our actions have some value in the present. The future that we imagine is unlikely to come about, if it does come about it will not last, and when it does come about we will probably despise it."

Alas, I am not the same intellectual ballpark as Dienstag, let alone Larison, so I'll merely belabor the obvious: While Obama excites the heck out of me and other voters in the abstract, how do we know whether he can deliver on his message since it is so lacking in substance beyond a welcome pledge to end the Iraq war?

The answer, of course, is that we don't know and just like George Bush's infamous "trust me" line, we'll probably just have to trust him, although I'm far from comfortable with that.

Can Obama succeed without a political philosophy? Ronald Reagan, John F. Kennedy, Franklin D. Roosevelt and Woodrow Wilson, to name several notable presidents of the century past, all had philosophies that were their lodestars.

Rick Moran is among the best right-of-center bloggers because he actually uses his brain like a precision instrument and not as a cudgel, but he is in full sour-grapes mode because Fred Thompson, his inexplicable darling for the Republican nomination, left the scene with an embarrassing whimper.

Rick, who seems to be taking his pique out on Obama, asks:

"Just what exactly does he stand for besides the vague platitudes about 'hope' and 'change' that pepper his speeches like little dollops of whipped cream? Where is the rock to which he tethers his beliefs?

"I don’t think this is a question of intellectual laziness but rather it is a matter of not having spent enough time confronting, questioning, strengthening, and ultimately adopting in his own mind the bedrock foundation of a political philosophy."

So Rick believes that Obama has not burned sufficient shoe leather compared to say, Reagan, whose political philosophy the conservatives who bankrolled his candidacy cut, pasted and handed to him on a silver platter. Yes, I'm being facetious, but it is a good question nevertheless.

This is because when the proverbial hits the fan, which is bound to do sooner rather than later in an Obama or any other presidency, what does the guy have to fall back on? A big bowl of symbolism just won't do it.

What does somewhat help my comfort level is the impressive roster of senior legislators who have endorsed Obama. To date these include Pat Leahy, Kent Conrad, John Kerry and Ted Kennedy. (Diane Feinstein, of course, has thrown in her lot with Billary. Darn!)

As has been remarked, endorsements seem like a hangover from an earlier era, but these guys have an extraordinary amount of experience and none would seem to be naturals to endorse Clinton. So do they know something or do they merely smell change in their air?

Avedon Carol, a transplanted American who blogs from London, riffs on a not dissimilar situation at The Sideshow:

"I can't help remembering that beautiful spring day in 1997, walking through Piccadilly and feeling such enormous relief at having kicked out the Conservatives, even though I knew that Blair's virtues were pure projection by his idealistic supporters and that he was much more likely to continue what the Tories had been doing. But they were all so sure that he'd bring . . . Change. I had hoped that the rest of the Labour Party could rein him in, and they didn't. Someone tried to tell me last night that isn't , but that's no solace - I've already seen how well the Democrats fight against conservatives; they've been much better at fighting against their own supporters. I . . . dread what will happen if Obama does break your hearts."

I do too, and my heart is frail when it comes to promises made and not kept, but I'm willing to take a chance and will vote for Barack Obama next Tuesday.