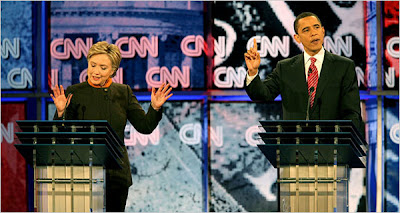 You might remember Moe Greene. He was a Vegas hot shot in The Godfather, the guy who taunted Michael Corleone by boasting, "I made my bones while you were going out with cheerleaders!"

The big question is whether Hillary will reap electoral rewards for taking it to Obama, goading him to explain himself, forcing him into Moe Greene mode. Has she created reasonable doubt in the minds of black South Carolinians – or will she suffer a backlash for her efforts? No predictions here. As I see it, there was only one immediate winner of last night's debate. It was the guy that all three Democrats were suddenly invoking, while making the case for their own electability:

Dogs don't chase after parked cars, as Jazz Shaw once said, and Hillary wouldn't have gotten so personal in her attacks unless she feels threatened -- and certainly not in South Carolina, where Obama has built a reservoir of positive energy. Someone with confidence in winning the nomination would act presidential and stay focused on herself, and wouldn't kneecap an opponent with a reference like Rezko -- especially since shady real-estate and commodities deals lie just below the surface in her own history. Anyone recall the Whitewater deal that contributed to an S&L collapse and a federal bailout, or the cattle-futures deal?

Hillary treaded on thin ice last night. She may find out that it cracked beneath her as people absorb the impact of the debate.

It's hard for me to think of much good from this debate. If you view debates like a boxing match, I guess it was lively and perhaps entertaining, in the sense that a good boxing match can be, though the fighting was more intense than well executed. But that's only if you have no investment in the outcome. If you're watching this with a mind to wanting one of these three to be president in 2009, as I do, it wasn't a great thing to watch.

One observation stands out to me from this debate. Hillary can be relentless and like a sledgehammer delivering tendentious but probably effective attacks. But whatever you think of those attacks, Obama isn't very good at defending himself. And that's hard for me to ignore when thinking of him as a general election candidate.

In most of these cases -- such as the Reagan issue -- I think Obama's remarks have been unobjectionable but ambiguous and certainly susceptible to both misunderstanding and intentional misrepresentation. And if you're going to talk like that -- nuance, as we used to say -- be able to defend it when people play with your words. And I don't see it.

Primaries are always contentious and if you allow yourself to care about a particular candidacy, you're likely to build up some ill-will towards the others. However, the campaign's tactics are testing the integrity of their supporters. For bloggers that have cried foul about Bush's staged events and planted questions, what can they say when the do it? When we howled about voter suppression, we never expected our own side to engage in it. When we protested racist dog whistle politics, we didn't think we'd see it in our own primaries. To overlook these things is to lose our own integrity. I won't overlook it. My personal integrity is more important (to me) than the outcome of this election.

[N]o pundit, no vicar of vicariousness, no phony insider, ever suffers for fatuousness or bad prophecy.

I don't mean to pick on Mitt Romney — though heaven knows it's a thriving national pastime — but his retro persona exemplifies much of the present Republican dilemma. It’s not just that the old Reagan coalition of social, economic and foreign-policy conservatives has fractured. A more indelible problem for the Republicans in 2008 is that their candidates are utterly segregated from reality as it is lived by the overwhelming majority of their fellow Americans. The G.O.P. presidential field’s lack of demographic diversity by age, gender, ethnicity or even wardrobe, let alone race, is simply the leading indicator of how out of touch its brand has become.

I can't imagine a post-campaign Romney taking on a big issue like global warming and changing the global dialogue. Gore is a blowhard and a little plastic. But he has convictions.

Yes, Obama escaped Nevada with a virtual split on the delegate count, and heads to friendlier turf in South Carolina, where a victory would send him into the Feb. 5 contests with a 2-2 record. But in the wake of his popular vote losses in New Hampshire and Nevada, he absolutely needs that South Carolina victory, or else he'll risk being perceived as a potential one-hit wonder (Iowa). Indeed, his crossover appeal to white voters (again, Iowa) is already at risk, since Hillary won white voters in New Hampshire, by three points, and won them in Nevada by 18 points. He needs white voters in order to buttress his autumn electability argument, but the irony is that he'll be mainly relying on black voters to carry him to victory in South Carolina.

In a rare public warning to the power and utility industry, a CIA analyst this week said cyber attackers have hacked into the computer systems of utility companies outside the and made demands, in at least one case causing a power outage that affected multiple cities.