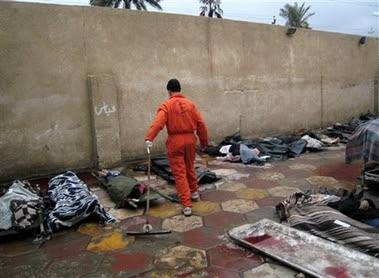 At least 150,000 Iraqis died violently in the 40 months following the US-led invasion in 2003, according to an estimate derived from the most comprehensive survey yet of mortality in post-war .

The new estimate, based on an Iraqi government survey supervised by the World Health Organisation, falls in the middle of the two most commonly cited assessments of the death toll following the invasion. It is published in an article in the New England Journal of Medicine.

The Iraq Body Count, which uses media reports and is therefore considered likely to underestimate the actual numbers of people killed, counted 47,668 deaths between March 2003 until June 2006. A study published in the Lancet, another leading medical journal, based on far fewer household interviews, estimated more than 600,000 deaths.

There is no reliable death registration system in and the past efforts to estimate the numbers killed have become the focus of deep controversy.

The new estimate suggests violent deaths increased 17-fold when compared with the years immediately preceding the invasion. Salih al-Hasanawi, 's health minister, said he viewed the survey as "very sound, based on an accurate methodology".

The question everyone is asking is whether anything is happening in the other than a two year long marathon to decide who will be the next president of the , news of each milestone being covered as though it were the determining factor in establishing the winner. As we draw closer to the time when there will be an event that actually determines that fact, news of all else is virtually eclipsed by news of what was, was not, is, is not, will be, may be, or won’t be insofar as it affects those seeking the presidency. I am happy to report that there is other news even though it is not altogether new news. It concerns the death penalty. And it is a subject with which two countries that treasure human rights above all else -- the and --are dealing.

The 670 inmates stacked up on 's death row embody an overloaded, flawed system. The sheer number has gummed up the machinery of the courts, creating a backlog of appeals and decades-long delays. As Mercury News writer Howard Mintz reported on Sunday, a death row inmate is three times more likely to die of natural causes than by lethal injections.

Today, the state Commission on the Fair Administration of Justice will begin an overdue examination of capital punishment. It coincides with a decline nationwide and in of death-penalty sentences and of executions - a reflection of the people's growing ambivalence.

A string of high-profile exonerations, through DNA testing, is heightening public concern. In addition, the U.S. Supreme Court heard a case earlier this week challenging lethal injections as cruel punishment.

As opponents of capital punishment, we favor following the path of , which abolished the death penalty last year and converted the sentences of eight inmates on death row to life without parole. We believe that is a harsh punishment that provides certainty to victims' families and spares the state protracted costs of litigation.

But even advocates of capital punishment should agree on the need for reforms. The death penalty should be applied sparingly, consistently and fairly. That's not the case in , which, through voter initiatives, has amassed one of the nation's most expansive death-penalty statutes.