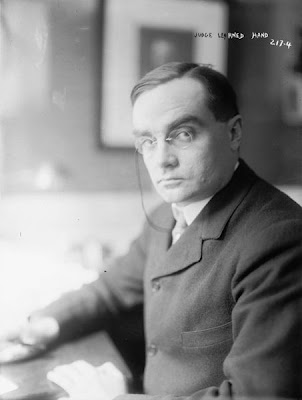 Any one may so arrange his affairs that his taxes shall be as low as possible; he is not bound to choose that pattern which will best pay the Treasury; there is not even a patriotic duty to increase one's taxes.

Billings Learned Hand is probably the most influential American judge you never heard of.

Hand served for many years as chief judge of and the intellectual engine for the U.S. Court of Appeals for the Second District in . A philosophical pragmatist, his landmark rulings on free speech, tax law and economics are widely considered to be among the formative statements of contract and tort law.

Born in , , 136 years ago today, Hand studied philosophy at under William James and George Santayana, among other gurus, before receiving a degree from Harvard Law.

Hand was appointed to the U.S. District Court for the Southern District of New York by President William Howard Taft in 1909 and was promoted to the Second Circuit by President Calvin Coolidge in 1924, where he served for the rest of his life.

His 52 years as a federal judge is a record, and although he never was appointed to the Supreme Court, he is widely considered to have been a greater jurist than all but a few justices.

Hand did lend his voice to ongoing debates over judicial activism and the expansion of constitutional liberties, but his legacy lies less in constitutional law since relatively few constitutional cases came before the Second Circuit, than in contract and tort law.

Like his good friend, Supreme Court Justice Felix Frankfurter, Hand believed that judges had a limited role to play and asserted that the highest satisfaction a lawyer or a judge could derive came from knowing a job had been done in a craftsmanlike manner.

He did not see judicial restraint as an abdication of responsibility. In his view, exploring the underlying questions of law and creating rules appropriate to the times were paramount, with larger policy questions best decided by the executive and legislative branches.

Despite the landmark rulings in which he had a voice, Hand did not consider himself an activist judge and was critical of the so-called activist wing of the Supreme Court, headed by Justices Hugo Black and William O. Douglas, both of whom he believed improperly imposed their personal values on the law instead of the wishes of the legislature.

Hand believed strongly in free speech. In 1917, he wrote a highly controversial opinion in Masses Publishing v. Patten, a World War I free speech case in which he argued that the First Amendment protected all speech short of incitement to illegal action.

In 1950, Hand confirmed the conviction of 11 Communist leaders in United States v. Dennis, a case in which the clear and present danger test was watered down to allow the government to prosecute people for teaching the overthrow of the government. That would seem to be a far cry from the Masses decision, but Hand was carrying out what he saw as his role as a judge in adhering to precedent and deferring to those elective branches. The Supreme Court was to later adopt Hand's position.

Hand twice came close to appointment to the Supreme Court.

In the 1920s he was considered for every vacancy on the high court, but William Howard Taft, by then Supreme Cour chief justice, block the appointment because he was still bitter at Hand having backed Theodore Roosevelt's Bull Moose ticket in 1912. In the early 1940s, Felix Frankfurter lobbied to have Hand appointed, but President Franklin D. Roosevelt wanted younger men and resented Frankfurter's heavyhanded tactics.

I stumbled upon Learned Hand as a college freshman some four years after his death when I was in a used bookstore and bought a copy of The Spirit of , a 1952 collection of his essays and addresses, including the epononymous speech below.

Hand gave this speech on May 21, 1944, a time when the war in the Pacific still hanging in the balance, He spoke to a huge crowd, many of them new citizens, at an "I Am an American Day" ceremony in New York’s Central Park.

Here is the text of his brief address, one that it is hard to imagine an Antonin Scalia or Clarence Thomas giving today:

"We have gathered here to affirm a faith, a faith in a common purpose, a common conviction, a common devotion. Some of us have chosen as the land of our adoption; the rest have come from those who did the same. For this reason we have some right to consider ourselves a picked group, a group of those who had the courage to break from the past and brave the dangers and the loneliness of a strange land. What was the object that nerved us, or those who went before us, to this choice? We sought liberty; freedom from oppression, freedom from want, freedom to be ourselves. This we then sought; this we now believe that we are by way of winning. What do we mean when we say that first of all we seek liberty? I often wonder whether we do not rest our hopes too much upon constitutions, upon laws and upon courts. These are false hopes; believe me, these are false hopes. lies in the hearts of men and women; when it dies there, no constitution, no law, no court can even do much to help it. While it lies there it needs no constitution, no law, no court to save it. And what is this liberty which must lie in the hearts of men and women? It is not the ruthless, the unbridled will; it is not freedom to do as one likes. That is the denial of liberty, and leads straight to its overthrow. A society in which men recognize no check upon their freedom soon becomes a society where freedom is the possession of only a savage few; as we have learned to our sorrow.

This is another in a series of appreciations of the people who have moved and inspired me over the years. It is based in part on an Oxford University Press essay on Hand. Previous appreciations have included Duane Allman, Hoagie Carmichael, John Coltrane, Aaron Copland, Jerry Garcia, Bill Graham, Stéphane Grappelli, Bob Marley, Laura Nyro and Eleanor Roosevelt.

And I cannot imagine Ruth Bader Ginsburg or David Souter making this speech, can you? Really?