Putting the Elephant Back Together Again 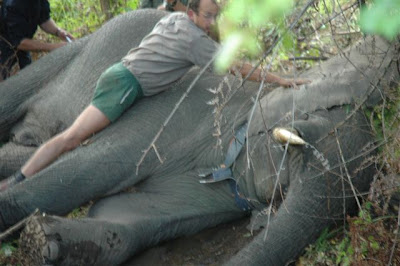 I agree with Peggy Noonan, the former Reagan administration speechwriter, conservative doyen (doyenette?) and Wall Street Journal columnist, about half the time. That actually is a great improvement over a few years ago when I never agreed with her.

For what it's worth, we're older and wiser, which has led me to be a bit less dogmatic and Noonan to be able to do a 180-degree turn on George Bush and declare in her latest column that the president is the primary reason that the Grand Old Party finds itself looking down the wrong end of the telescope these days:

"George W. Bush destroyed the Republican Party, by which I mean he sundered it, broke its constituent pieces apart and set them against each other. He did this on spending, the size of government, war, the ability to prosecute war, immigration and other issues.

"Were there other causes? Yes, of course. But there was an immediate and essential cause.

And this needs saying, because if you don't know what broke the elephant you can't put it together again. The party cannot re-find itself if it can't trace back the moment at which it became lost. It cannot heal an illness whose origin is kept obscure."

Powerful prose, but in a way La Noonan is well behind the times.

Some of us understood several years ago that Bush's reign of error would have dreadful repercussions for the GOP sooner or later, the 2006 mid-term elections being only a taste of what was to come. It's just that the Republicans who understood the destructive nature of the administration didn't have the guts to speak up.

Not that it would have mattered, but shame on them anyway. Because, as I wrote here the other day, sentient Republicans are now faced with the spectacle of some, if not many, of their conservative brothers and sisters not voting in November.

This is a possibility if the nominee is John McCain, who in racist parlance is not white enough for the party's atrophied conservative base. For my money, McCain has the best chance of the party holding onto the White House but can't win without that base.

As I have written before, the reality that the tide is going out on the Republican Party so fast is enormously troubling even though I am a left-of-center dude. This is because we need (at least) two vibrant political parties if only as a check on the Democrats' likely default to their own brand of hackery if they completely take over the henhouse.

What the heck can sentient Republicans do to try to put the elephant back together again?