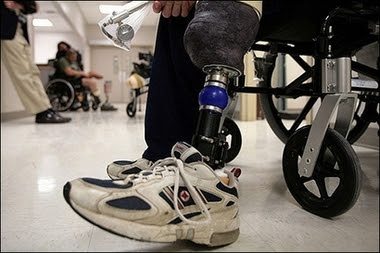 Osama (bin Laden) doesn't have to win; he will just bleed us to death.
-- MICHAEL SCHEUER

The war is a sucking chest wound on the American economy.

You certainly didn't hear President Bush say that during his State of the Union address on Monday night; in fact, he glossed over the war. Nothing about holding the Iraqis accountable. Nothing about the successes of the Surge in danger of being squandered. And certainly nothing about troop withdrawals.

As a matter of fact, there has been shockingly little discussion from presidential candidates or anyone else as the economy does a pretty good imitation of sliding into recession concerning the enormously negative impact Bush's Forever War is having on America's overall fiscal health, including a burgeoning budget deficit and the fact that our children's children will be paying for this misadventure long after we're dead and gone.

Initial estimates that the war would cost less than a hundred billion bucks were famously undercut by White House economic adviser Lawrence Lindsey who offered an "upper bound" estimate of $100 billion to $200 billion in a September 2002 interview with The Wall Street Journal, but argued that "The successful prosecution of the war would be good for the economy."

Well, let's see: Direct spending on the war is expected to reach one trillion dollars with indirect spending contributing billions more even if the U.S. withdraws in the next year, which is not going to happen. Some economists say the total economic impact will reach $2 trillion.

(By way of comparison, The Center for Strategic and Budgetary Assessments, a nonpartisan think tank, has estimated that the Korean War cost about $430 billion and the Vietnam War cost about $600 billion in today's dollars.)

Now this enormous expenditure of taxpayer money is just peachy if you are a defense contractor like Lockheed, a private security contractor like Blackwater or make artificial limbs, but the fact of the matter is that wars just aren't as good for the economy – especially as the has morphed into a service economy – than they once were.

The war in is chump change compared to , but as Michael Scheuer, a former CIA counterterrorism official quoted atop this article notes, Osama bin Laden doesn't have to defeat the imperialist American heathens with bombs and hijacked aircraft.

He can just bleed us to death – and is well on the way to doing so.

Your thoughts mesh nicely with those of Paul Kennedy who points out that serious wars are generally won by the side with the biggest GDP. IMO, the big problem in Iraq is the dollar kill-ratio.

If we fought with the Soviet Union, it was pretty much straight up -- dollar for dollar. Whatever we spent, they had to match. At least, that's the CW on Reagan's success against them. The USSR ran out of money before we did.

In the case of asymmetric warfare, the money is the most asymmetric part of it. Force projection is very expensive. Any action on the other side of the planet is going to drain us. But this is worse because each dollar the enemy spends must be matched by some large number of dollars on our part. My swag is that the battlefield kill-ratio is at least 20 to 1 for sunni types. I heard much higher in anti-Sadr actions early on. Maintaining that ratio is expensive, but, I think you would agree, worthwhile.

My guess for the dollar kill-ratio, however, is that it is much higher. Let's just venture that it's $1 to $10,000. So every time we drop a meg worth of bombs, the enemy can match it with equal effectiveness using a hundred dollars worth of IED. The problem is that they are getting it. We have been giving it to them! We are paying for both sides in this war. It is extremely hard to keep the huge flow of petro-dollars from dripping a little bit into their hands. The Islamic "charities" are not helping either.

Our strategy, as far as I can tell, is now to emphasize the CLCs, who operate on a dollar-dollar basis against the AQ forces. Every dollar we give them that gets used against AQ saves us 10,000. Penetration is what matters here. How many of the dollars are directed correctly?

Now, to the question of whether we can afford it, remember that the war represents a fraction of our national debt. At two trillion, the per capita cost of the war is about $6,000 spread over, let us say, ten years. How much do you suppose we spend on SUV's? In other words, this is not the cause of our economic problems. Note also that much of the war money churns back into our own economy, upgrading, to a degree, generalizable skills and facilities, and keeping people employed.

IMO, our economy was stung by corrupt financial activity extending over a decade, causing extensive and pervasive misallocation of housing resources. This folly was also funded, or at least encouraged, by our own government. Please tell me, which party is the anti-bubble party?

What an astute perspective. Thank you for sharing.

Thank you for your generous accolade. Please understand that it is only my respect for you that motivates me to argue with you.

You are ignorant of the "firewalls" that exist between defense and non-defense discretionary spending in the DC appropriations process. Bullets therefore do not come at the direct expense of goodies for the kids.

Furthermore, in 2008 we spent even more on foreign oil than we did on our entire defense budget. It's the run-up in oil prices, constituting the equivalent of a 40% income tax hike, that did our economy in.

Glenn Reynolds is exactly right. Former NASA engineer Robert Zubrin has hit on the affordable, practical solution, which is like a rifle shot to the heart of OPEC.

Best of all when the world moves to an alcohol economy, the strategic significance of Iraq and the rest of the Mideast declines drastically. Not only de-funding the terrorists and other foes, but also reducing our (real or perceived) need for intervening there.

Wow! Mr. Carney's time machine takes us back a year, but the story is still relevant. Zubrin's flex-fuel mandate is a great idea. If we find a way to produce ethanol cheaply without stealing food from the third world, it would pay to be ready for it. But equally important is the insurance that it provides us against petroleum extortion. At least some of our vehicles will still be running. I haven't heard of any auto company planning for a flex-fuel plug-in hybrid, though, which would be the most sensible transition vehicle.

Electric cars and nuclear power will be our salvation.

On the sucking chest wound, it's interesting that this incipient depression had nothing to do with Iraq or petroleum. It came down to a massive misallocation of resources into federal housing support. Moody's was the villain, not Cheney.

I still want to know which is the anti-bubble party.