He's The Man With the Economic Plan 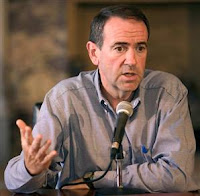 You can add financial guru to Mike Huckabee’s deep resume of talents and accomplishments.

Turns out that the Republican presidential wannabe is on the board of directors of Flagship Global Health, which claims that it "does what health insurance does not do - connect you to the best doctors, quickly, regardless of network affiliation."

Flagship says that it is not an insurance company but "a health care company in the truest sense of the word" with a better than 99 percent customer satisfaction rate.

The company's founder, Fred Nazem, says he recruited Huckabee to Flagship in February 2006 when he was still governor and has been impressed that he has called in for board meetings from the campaign trail.

So how’s Flagship doing with the Huckster on board?

It last closed at 52 cents in over-the-counter bulletin board trading, earning it penny stock status.