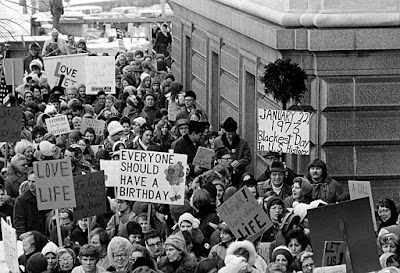 I would be remiss to let January slide into oblivion without noting that it marks the 25th anniversary of Roe v. Wade, the landmark Supreme Court decision stating that a woman had a constitutional right to an abortion that has withstood the test of time despite my view that it was a well intentioned but lousy decision.

The court, in a 7-2 ruling, held that abortions are permissible for any reason a woman chooses up until the point at which the fetus becomes "viable," that is, potentially able to live outside the mother's womb, typically about seven months. Viability is usually placed at about seven months, but Roe allowed for a mother to have an abortion later if her health was in peril.

Roe divided Americans into two camps – pro-choice and anti-choice, which are my terms of choice. It jumpstarted a national debate that continues to this day and has become the third rail of Republican Party politics as the GOP has fallen into the thrall of right-wing scolds who believe the Constitution is a Republican document which empowers them to oppose big government but support that government telling people what they cannot do with their bodies.

Opponents of Roe say that it lacks a valid Constitutional foundation.

The Constitution is, in fact, silent on the issue, and while I support Roe in principle the issue should have been left to state legislatures and voter referenda. This, of course, exposes women who decide to abort a fetus at the mercy of anti-choicers with political clout and indeed in the wake of Roe most states enacted or attempted to enact laws limiting or regulating abortion, often through parental and spousal consent provisions.

You seem to miss the point when you say that the Supreme Court is telling a woman what she can or cannot do with her own body. Drug laws and prostitution laws do the same thing. If you are quite libertarian in philosophy, as I am, then you would disagree with those laws also.
But, you fail to consider the liberty of the human life inside of the woman. It's simple really. Is the being inside of the woman alive or not?
The answer is obviously "Yes". So the next question is what kind of life is it?
Is it a giraffe, a whale, a toad, etc.? Or is it a human?
Any rational thinker would conclude that this being in the pregnant woman is a human life. Therefore, to narrowly make the argument that this is simply about a woman being able to do with her own body as she chooses is deceitful and illogical. It would be no different than saying I should be able to drive my car through a playground of toddlers because it is my car and I should be able to do with it as I "choose."
Your argument is unintellectual and rationally and factually wrong.

All laws constrict choices, consist of forcing people do do what they do not wish to do, or punishing them if they do something forbidden. That's why they're laws instead of recommendations or requests. Are laws against murder and rape "anti-choice"? It's an absurd formulation that begs the question and ignores what is at the heart of the issue: abortion.

The 40% and change of Americans who call themselves "pro-life" and the solid majority wish to ban all or most abortions are not, despite politically motivated calumny, motivated by a desire to deny women choice and control. Very few care whether women get breast implants, or choose or decline hysterectomies, and so on, certainly not enough to make laws restricting choice on the matter.

However, I have yet to find a dedicated "pro choice" politician or single-issue activist who favors getting government out of, and giving women, the following choices, just for starters:

Whether to join a union and give it money for political purposes; or whether to be forced into it and have it dun her paycheck to spend as it likes as a condition of employment regardless of her preferences;

Whether to trust her retirement savings to non-binding promises from politicians for a miserable 1% rate of return someday, or whether to instead own and control all of her own retirement funds, to be invested and saved as SHE sees fit;

Whether to be a helpless victim of the next armed assailant or just the next hostile man who is stronger and faster than she is (as the average man is vs. the average woman), or whether to instead own AND CARRY a firearm;

Whether to do business with clients/customers, sell her home, allow people on her property, or hire an employee, SOLELY of her choice (regardless of whether you or anyone personally approves of her preferences and reasons), or whether government bureaucrats and prosecutors can force unwelcome people onto her property and into her affairs against her will, imposing their preferred morals on her;

Instead these people are straining at the leash with eagerness to force their preferred choices on women. So again, it's not about choice, it's about abortion.

Say the word, don't hide it, don't obscure it in a cloud of abstract gasbaggery.