Dems Shoot Themselves In the Foot on Race 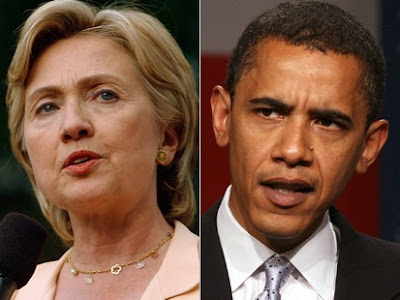 Race may be the ultimate red herring as well as the most potentially destructive element of the Democratic presidential race.

While the Republican field has fled from debates before black audiences, can expect precious few black voters come November and issues pertaining to race come up only incidentally such as in the context of immigration reform or whether Mitt Romney did or did not march with Martin Luther King Jr. as a young man, the Democrats have the high ground.

Which makes the by now incessant sniping between the Clinton and Obama camps over race downright silly. There always should be a place in national political discourse for racial issues, but they're not doing that so much as engaging in a food fight over which candidate is more racially attuned in transparent and clumsy efforts to win precious black voters in the next round of primaries.

It is Bill Clinton, who is not facetiously sometimes referred to as "America’s first black president" because of his own struggles to overcome adversity and historically strong support in the black community, who is throwing the most food with ill-considered remarks aimed at Obama, including his dismissive description of the platform of his wife's black challenger as the "biggest fairy tale I've ever seen."

I’m not suggesting that the camp lay off of the racial stuff. Obama is fair game. But it has been embarrassingly bad as it trots out one surrogate after another and then inevitably, and I suspect calculatedly, have to backtrack and say they really didn't mean what they meant.

The surrogates range from spear carrier Billy Shaheen, Clinton's semi-disgraced former New Hampshire co-campaign manager, who "warned" that Republicans would seize on the issue of whether Obama had not just done drugs but sold them as a teenager, to a conveniently anonymous Clinton advisor who told a reporter for The Guardian that "If you have a social need, you're with Hillary. If you want Obama to be your imaginary hip black friend and you're young and you have no social needs, then he's cool."

Now the campaign is putting out the word that it is moving to ease racial frictions that are substantially of its own doing. If memory serves me correctly, this is at least the third such time in the last two months that it has been "forced" to say so.

While the election is the Democrats to lose, it's been a while since I've noted that they are perfectly capable of blowing it. The current smack down over race is a good, if ironic start considering that the big racial story is the shameful Republican Party record on race and its absence as a positive part of its candidates' campaigns.

Posted by Shaun Mullen at 9:45 AM
Email ThisBlogThis!Share to TwitterShare to FacebookShare to Pinterest

The Dems take the black vote for granted.

See the post at my blog about Obama. I think progressive Dems are not looking close enough at him.