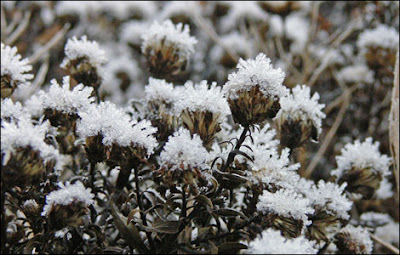 Most science history buffs are familiar with William Herschel, the famed astronomer who discovered the planet Uranus in the 18th century. His son, John, is less well known, perhaps because his scientific interests ranged more broadly than his father's. He loved the stars, it's true, but he also found wonder much closer to home. Evidence of that can be found in a January 12, 1833, letter printed in Philosophical Magazine, in which John Herschel describes going for an early morning walk (what folks today would consider a hike) several winters before and noticing "a remarkable deposition of ice around the decaying stems of vegetables." A few days later, he found a similar strange ice formation, this one seeming "to emanate in a kind of riband- or frill-shaped wavy excrescence."

Herschel's letter is one of the earliest recorded observations of the phenomenon of "frost flowers" (sometimes called ice flowers or ice ribbons), in which thin layers of ice curl out from long-stemmed plants in the wee morning hours of late autumn or early winter. Those ice layers often form intricate curling patterns, looking for all the world like flower petals. Herschel could only hypothesize about the cause of these formations, but he intuited that they correlated with specific atmospheric conditions and particular kinds of plants, although he couldn't explain why that might be the case, concluding, "It is for botanists to decide."

It is not now, nor has has it ever been, the Fed's responsibility to prop up market prices. Yes, insue the markets were functioning properly -- but not provide a put. That nonsense was supposed to have left with Easy Al. Unfortunately, Bernanke not only inherited Greenspan's mess, he inherited his Put also.

Even more concerning is the possibility that the Fed is "Pushing on a String." . .

Does this mean we will get another 25bps cut? How about Thursday? Or is backstopping the markets a one shot deal? Thank goodness I have a lot of math, cause thru the clever use of differential equations, I can calculate that the Fed has only four more Shock and Awe 75 bps cuts, plus a Shock (but no Awe) 50 bp left.

The Fed wasted alot of ammo yesterday -- and what looks like for naught . . .

To the casual tabloid reader, Britney Spears' life looks like a train wreck. But Britney Spears is good for the U.S. economy. Seriously.

Conde Nast's Portfolio magazine this month takes a look at the "Britney-Industrial Complex" and finds a $110 million to $120 million economy. What's troubling might be who is cashing in: paparazzi, the tabloids, lawyers and . . . um, websites.

The current crisis is not only the bust that follows the housing boom, it's basically the end of a 60-year period of continuing credit expansion based on the dollar as the reserve currency. Now the rest of the world is increasingly unwilling to accumulate dollars.'


A husband retires and starts going grocery shopping with his wife, the long serving cook and Mother of the family. By trip two he not only catches on but envisions he can shop smarter and better.

His out loud suggestions should engender a cartoon like humor response but they're actually grating to the ear. Human nature is not logical and certainly some parts of human nature don't bear public scrutiny well.

Then, there's the case of two Presidents residing in the White House simultaneously. Oh yeah.

But. But. You know what. This Presidential "Double Occupancy" scenario could easily become an international comedic soap opera.

Poof! The raging hatred and loss of prestige for America that hallmark Bush's actions in office could evaporate into winks and smiles as Bill and Hill bring "He said - she said" domestic relations to international diplomacy.

Set aside those suicide bomb suits guys. This is going to be fun.


It looks like a singular political figure has suddenly broken through and united both the left and the right in this country. Everybody seems to be ticked at Bill Clinton.


The west must be ready to resort to a pre-emptive nuclear attack to try to halt the "imminent" spread of nuclear and other weapons of mass destruction, according to a radical manifesto for a new NATO by five of the west's most senior military officers and strategists.

Calling for root-and-branch reform of NATO and a new pact drawing the US, Nato and the European Union together in a "grand strategy" to tackle the challenges of an increasingly brutal world, the former armed forces chiefs from the US, Britain, Germany, France and the Netherlands insist that a "first strike" nuclear option remains an "indispensable instrument" since there is "simply no realistic prospect of a nuclear-free world."