Reagan, The Once Shining City On the Hill & Other Notes From the GOP Asylum 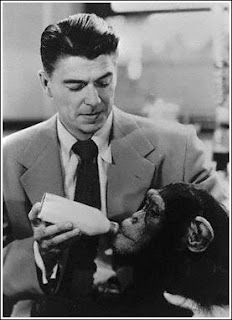 Ronald Reagan has been the luckiest president of my lifetime, which is one reason that I find myself chuckling when his name is invoked -- as it frequently is these days -- by the Republican presidential wannabes and by that Obama fella on one or two occasions, as well.

What do I mean by luckiest?

Because Reagan was pretty much an empty vessel into which every Republican mover and shaker of consequence of his time poured their own political views and agendas. He was a universal wrench of a man whose primary qualifications were a mediocre movie career and so-so turn as governor of . He had no interest in details and was befuddled by complex concepts, but was extraordinarily adept at exciting the Republican political base and making Americans feel really good about themselves even as he rewarded the rich and undercut the middle class.

Aside from that nasty assassination attempt, some recession messiness during his first term and being caught out in the Iran-Contra affair, things usually broke Reagan's way whether he was napping or not, most notably when the Berlin Wall came down and swooned on his watch. Today he is an oft-cited conservative icon despite the reality that he had little substance beyond his political skills.

I am fond of saying that you make your own luck, and George Bush certainly has done so.

Like Reagan, Bush has been pretty much an empty vessel into which today's Republican movers and shakers (read neocons and right-wing Christianists) have poured their own political views and agendas. Like Reagan, he was more resume than man when he became president. And like Reagan, seems to use a notably small part of his brain but once upon a time could excite that political base.

After the 9/11 attacks, Bush did a passable job at making Americans feel really good about themselves at a really lousy juncture in their history and then, because he believed the sycophants around him when they called him The Latest and The Greatest, recklessly squandered the greatest presidential mandate since Pearl Harbor on the Iraq war and other misadventures. So enormous has the collapse of the Bush presidency been that it has to be ranked right behind the 9/11 attacks as the biggest story of the young millennium.

The Republican Party is trebly hobbled this election season:

With Vice President Cheney a hiccup away from what Redd Foxx called The Big One on "Sanford and Son," the party has no heir apparent. Bush has almost single-handedly ended the Republicans' grip on power. And because he is so toxic, the presidential candidates have to look hard over their shoulders to when that city on the hill last shined so brightly for the Grand Old Party.

That would be Ronald Reagan.

FRED THOMPSON'S PHANTOM CANDIDACY
Has there been a stranger White House run in recent memory than that of the dear departed Fred Thompson?

It was obvious from the moment that the former Hollyweird actor sleepwalked onto the national stage that his heart was not in a White House run although a lot of people, including otherwise sentient bloggers, went bonkers over Thompson and considered him the closest thing to a reincarnation of . . . well, Reagan.

Many pundits are blaming Thompson's flameout for disorganization and/or his somnambulant style and I think these factors did indeed play a role. Dr. Clarissa Pinkola Estés puts this in context in noting that no amount of money can buy fire in the belly, a quality notably absence in Thompson. Then there is the fact that Thompson's mother is seriously ill, which is unfortunate but a piss-poor excuse for bailing because it raises the specter of how he would have performed as president every time someone in his family got the sniffles.

But my favorite reason -- because it is so precious -- is that Thompson foundered because that old Reagan coalition has been destroyed by the Decider and Reaganistas have been rendered impotent.

Uncharitable translation: This crowd, with Viagra or without, simply was incapable to thinking outside the box in a campaign season where none of the other GOP candidates are either.


'WILL YOU SHOOT YOUR BROTHER?'
Here's a word that you would never apply to Reagan or Thompson: Vengeful.

But that suits Rudy Giuliani to a T and is one of the reasons why he is hands down the scariest candidate out there.

The New York Times, which to its credit has done an excellent job of sussing out the skeletons in his closest, reports that:

"Mr. Giuliani was a pugilist in a city of political brawlers. But far more than his predecessors, historians and politicians say, his toughness edged toward ruthlessnessand became a defining aspect of his mayoralty. One result: New York City spent at least $7 million in settling civil rights lawsuits and paying retaliatory damages during the Giuliani years."

Among the people who did not kiss Giuliani's ring was a cabbie who complained on the mayor's call-in radio show about a red-light sting run by the police. When that got no results, he blabbed to The Daily News, which ran a front-page story that resulted in the cabbie's revenge arrest on a 13-year-old traffic warrant and a nasty blast from the mayor.

The cabbie suffered a nervous breakdown and later received a $290,000 legal settlement from the city.

Marilyn Gelber, who served as environmental commission under Giuliani, told The Times:

"There were constant loyalty tests: 'Will you shoot your brother?' People were marked for destruction for disloyal jokes."

Reagan's tinkering with the Tax Code plunged me into debt to pay for taxes that my withholdings did not cover.

Before that time, I had always received a modest refund.

I was just a young clerk working in a hospital, surviving on a small paycheck.

I still remember him, not so fondly, for his tax attack on the little guy (the modest wage earner).